Last night moored in Ramsey was surprisingly quiet and it wasn't until this morning that we heard any lories going by, by which time we could also hear the birds singing. By 9 am the sun was even out but didn't amount to much, still better than the forecast rain. Just as we were untying to leave I noticed about a dozen golf balls waking on the bed of the basin. There is a golf club at the other end of the arm but the main storm drains enter at the basin so probably the balls were washed in by that route and settled as soon as the water speed slowed down. We set off at 1020 and turned right at the end of High Lode onto the Forty Foot, 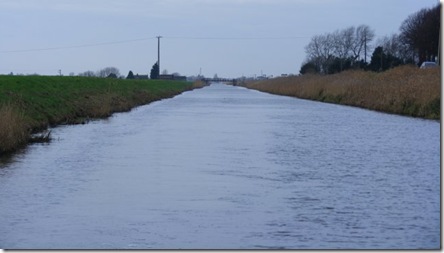 we followed this in basically 3 straight lengths as far as the junction Sixteen Foot Drain. We passed several fishermen on the way and it is striking how much friendlier they are around here and on the river compared to their comrades on the canal. They all look at you and are happy to exchange a few words, even thanking us for going slowly along the opposite bank so not to spoil,their swim. We turned up the Sixteen Foot Drain and followed it almost to Three Holes morning on the right hand bank midway between the last bridge where the road goes away from the water and the junction at Three Holes where more roads cross the water. Hopefully this will give us a very quiet mooring for the night
Posted by ************** Brian and Diana on NB Harnser******** Maps by https://www.waterwayroutes.co.uk at 15:13