Last night we ate in the Plume of feathers, a Neil Morrissey  pub. We found it quite good and very busy. Diana walked down when we arrived and they could only fit us in at 6 or 8-30 pm. The later time suited us well as we are normally late eaters. The service was good and friendly, portions a good size without being over the top and it all tasted very good.

Summer is definitely here, how long it will stay I don’t know. I woke early this morning to the sound of Ian’s boat chugging gently by, I suspect its a Russell Newbery twin in it, its the sort of noise that wakes you without disturbing you and I was soon back in the land of nod.

When we finally surfaced it was bright sunshine and by the time we were ready to go most of the other boats had left.  I have a theory, you ether have to go very early, like Ian or late like us, otherwise you are in with the crowd.

We finally pushed off just before 11 am passing Sandra with her boys from Golden Boyz a boat that sells doggie things. We had a good run to the top of the Meaford Locks. Here the road is closed to repair the bridge yet again. 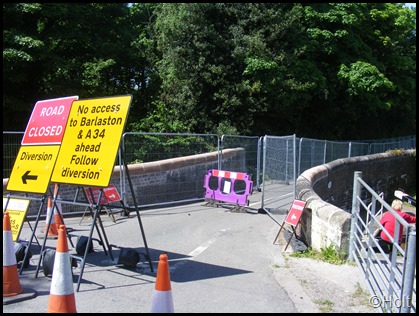 There use to be a bid power station on the off side along here, there are now plans to build a gas powered one that will only use a fraction of the site. 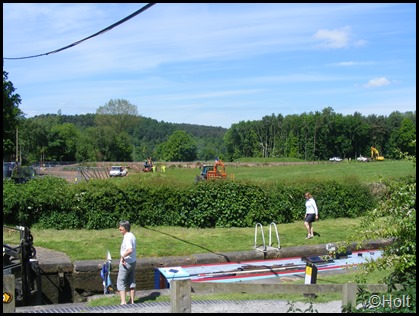 We met boats at nearly all the locks only turning the second as we thought the boat in the third was the one we were following, but it was actually one coming up. Its a long pound so they only waited a couple of minutes. In Stone a hire boater turned the lock even though the boat leaving said we were coming, but they were in bit of a hurry, they had already done the 4 Counties ring in less than a week.

In Stone we managed to moor above Stare lock on the 24 hour moorings by the car park and enjoy the afternoon sun, there is only one other boat moored on the tow path side now although there has been a bit of coming and going. I wandered down to the Star pub to get our glasses filled, that way I don't have to take the empties back. 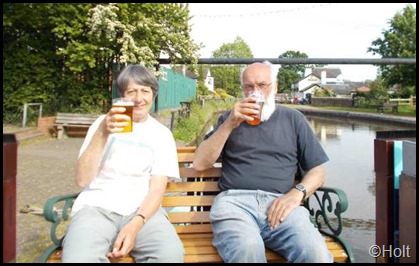 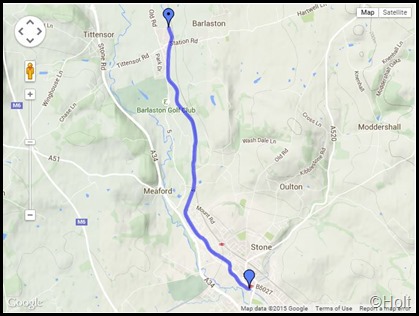