We were due to come out for blacking and a new rudder cup tomorrow morning, so the plan was to take the car today to Streethay and then cruise around a bit mooring overnight opposite the boat yard.

At 8-30 we got a phone call from Streehay saying they were running ahead and the slip was empty, where we in the area and if so could we come today. It was just on 9am when I left the marina alone, Diana was taking the car to Fradley and would meet me there.

The morning was lovely, tee-shirt weather and the canal quite busy, I met 4 boats before Woodend Lock. At Woodend there was a boat already going down so I left the bows against the top gate and closed up the offside for them before turning the lock. The lock was nearly empty when Diana walked up, she had parked the car at bridge 91 on the Coventry Canal and walked back to meet me.

Down at Shadehouse lock a boat had slipped out ahead of me and as I passed one coming up went really hard aground. At the locks there were volunteer lock keepers on duty which helped. Leaving Shadehouse there was a boat just exiting Middle Lock, ideal and after that one came out of the Coventry towards us. I indicated to the volunteer at Junction lock we were turning left and he very kindly left his lock and walked round to open the swing bridge for us. CRT still haven’t fitted a lock to the swing bridge, but they still intend to.

I dropped Diana off at bridge 91 so that she could take the car to Streethay.

The farmer is extracting water from the canal just before bridge 91, I think we need more of this as it puts speed hump on the

towpath and may well slowdown some of the speeding cyclists.

The house at Brookhay Bridge looks as if its been sold at long last. It looks a nice place in the middle of nowhere. It was not long after this that Diana was again coming up the towpath towards me.

At Streethay I pulled along side the service quay and reported in. It was some little while before they were ready for us. Because we were facing south the turn into the slipway is to tight, so we had to go down to the wide section, turn and approach from the other direction to be able to line up with the ramp. While I had been doing this they had run a trolley down the slipway to haul 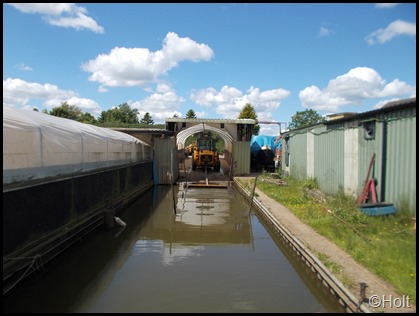 us out on. As Harnser is a bit deeper at the bows than most boats I had to back off so they could push the trolley further down. then forward until we bottomed out and keep the power on as they pulled the trolley up the ramp to take the weight.

The yard above the slipway has had a polytunnel erected over it to give a covered area for working under but a good air flow to dry the boat. 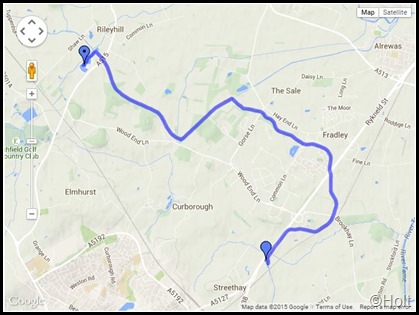