Yesterday evening it started to rain, not heavily but dripping from the overhanging tree branches, this continued into the night. Some people say they like to go to bed listening to the rain on the roof, not me thank you. Where we moored we were quite close to the road bridge and it was surprising the number of heavy lorries using it and the noise they made. Another surprise  was the hen house opposite that has at least 3 cockerels in residence. As expected they let fly at about 6 am this morning and then nothing, they went completely quiet unlike the ones at home. I did wonder if someone had dispatched them for dinner but they were out there when we left this morning.

We pushed off at about 10-30 am to a warmer morning, it was already 6°C outside and the rain had stopped. We had several bouts of very fine rain and we wee able to see a rainbow in the sky, at times we had real drizzle but not enough to warrant a rain coat going on.

The canal and railway are never far apart along here and looking over the fields I spotted this building which I guess was something to do with the railways at one time, it was probably the stripped roof that made me look but then I saw the Clerestory roof 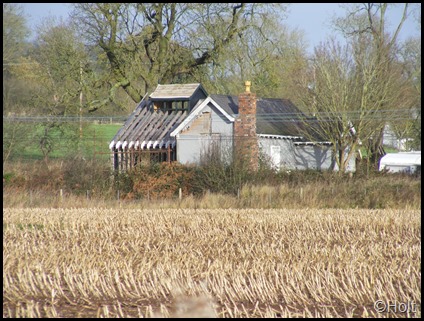 Last time we were this way they were about to commence dredging to the south of Aston marina and had all their plant on the bank. 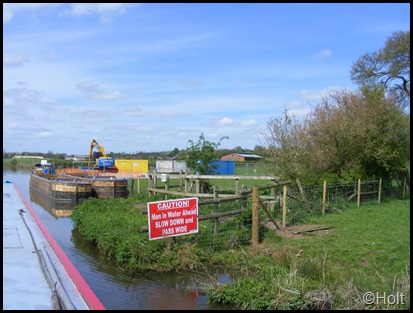 Today its all  been cleared away and you would hardly know they have been here, just a post from where they moored the mud 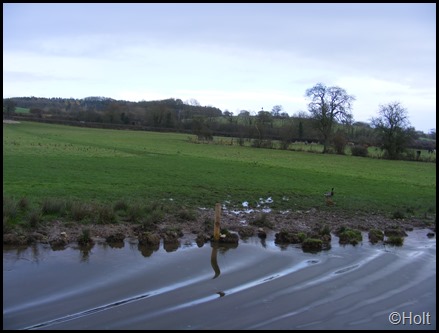 hoppers and darker grass where the temporary road was laid. What you do notice is how much better progress you can now make along this section of canal, I looked down at the Ipad and our speed had crept up from 3½ mph to over 4 mph.

We passed some interestingly marked sheep on one of the canal side fields, they are probably a specific bread which I don’t know but I bet someone out there does. 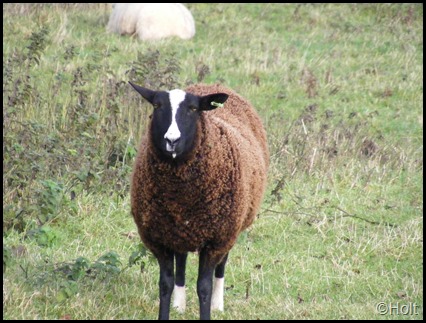 Just before Stone there is a manorial on the tow path, I am not sure how I really feel about this sort of thing, I know someone wants to remember a loved one, but is this the best way to do it? 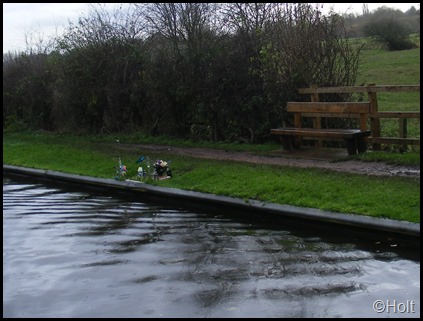 All the visitor moorings below Star Lock were empty, maybe half a dozen moored a little lower down, but once through Star Lock they were all taken.
We stopped briefly at Stone Boatbuilding where for the grand sum of 62p I bought a new seal for the diesel filler, I was so pleased they had them I even bought a spare. I changed it there and then, it was not is as bad condition as I thought, I am sure they last better since diesel went low sulphur or maybe the last one was better rubber.   We continued north as the drizzle stopped, saying hello to a couple of friends moored out side Roger Fuller’s boat yard.
Meaford Bottom Lock was the first one we have turned today, all the rest have been with us and in a couple of cases there were people waiting to come down so we didn’t even need to close them. We only did the first two Meaford Locks before mooring up for the night. We hadn’t been inside long when it started to rain properly, so stopping was a good move. 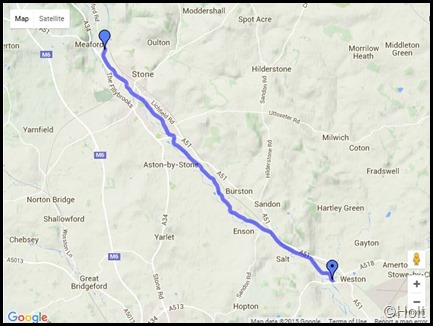