Last night we went to Thai Lanna for a meal, It is a long while since we have had a Thai meal so we are not conversant with the dishes, with that in mind we went for the second set meal on the menu that was graded with two chillies for hotness. The curry was literally boiling being served on top of a small burner but the chilly heat was just right, at the end of the meal we felt full but not bloated so that is on the list for a return visit.

Overnight the barometer dropped back badly so it was surprising to get up in bright sun shine. We wandered into town and called in at the butchers in Adies Alley. They shut down last April but there is a butchers there again although it is now split from the shop next door. Also their FaceBook still has up to date postings on it for Christmas cakes. After posting an important letter we returned to the boat and set off about 1030 am, two other boats had already been down the Star Lock ahead of us.

By now the sun had disappeared, the sky was black, rain in the air and I put on a full set of waterproofs. Just as we arrived at the lock so did a large band of CRT volunteers so we had help through the lock. One of the chaps told Diana that he reads this blog, so thanks for your help. 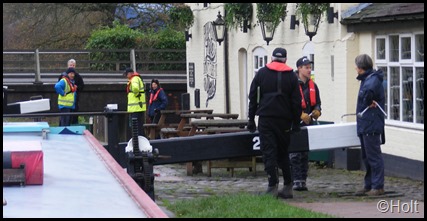 Below the lock we stopped to fill with water, there was not a single boat moored on the 2 or 5 day visitor moorings although there were half a dozen just beyond. On Tuesday I posted about 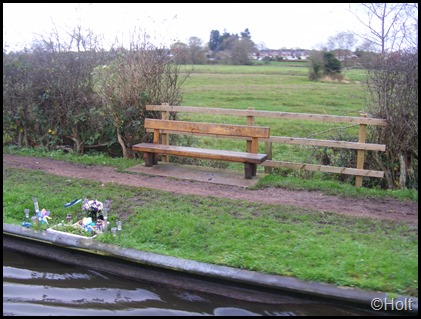 the memorial bench just to the south of Stone, since then I have received more information about it.
From what I have been told a young lad from Stone was murdered  and following his wake one of his young friends was making his way home along the towpath when he suffered an epileptic fit and fell into the canal and drowned. More details are available HERE

A little further on we saw some of the CRT volunteers yet again, they were busy planting bulbs on the bank beside the bridge. 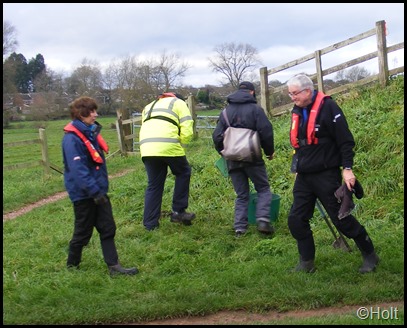 The canal was a bit busier today and we met a few boats coming towards us which meant we were able to leave lock gates open, very useful.

We carried on before mooring for the night at Shirleywich about half a mile below Weston Lock, O and the waterproofs worked a treat again as we didn’t have another drop of rain until after we had moored up, these must be the most effective waterproofs I have ever owned. 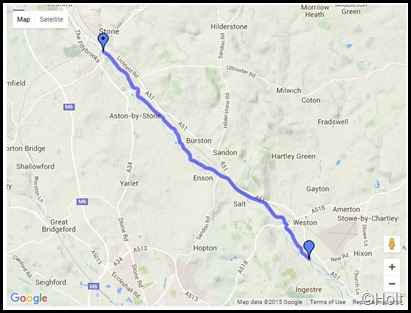 Thanks for including us in the blog ! We enjoy meeting all the customers of the waterways, and it's nice when you recognise people you've already met. The rain held off long enough for us to plant 400 bulbs and for you to make progress along the beautiful Trent valley. Interesting journeys on the blog ! Enjoy the rest of your voyages !

Andy (On behalf of the Stone VLK team)