Well our plans have changed very slightly, we had planned to spend a couple of days going up the Thames, but I downloaded their stoppage list and all we would be able to do would be to go out at Sheepwash and come in at Dukes Cut. I don't think its worth buying a days Thames licence just to do that, so now we will have to terminate at Oxford before heading back to Napton.
Last nights moorings were good and quiet, the moon managed to show its face a few times but mostly the evening was thin cloud, so it never really got dark. When I looked out early this morning there was very light mist and by about 9 the sun was out and it has carried on that way.
After carrying out minor adjustments to the Dickinson, I find the calibration screws creep slightly, so its not been burning at maximum this trip, we set off. As we approached Grants Lock there was a boat following us, they had been moored about a quarter of a mile behind us last night and then as we came round the bend to Kings Sutton lock there was a boat coming up, so that's 2 boats in one day.
BW have a large pile of rubbish at the Nell Bridge yard whit what looks like a 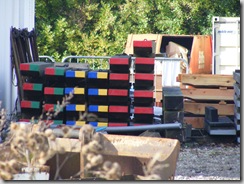 half decent inflatable dingy and loads of bicycle parts, a bath and all other sorts of stuff, I guess they must have cleared it all from the towing path. I was most impressed with their stock of stop planks with all the ends colour coded. I have still not been able to find the colour coded strong flow indication board below Nell Bridge. There is the useless height indication board between the lock and the bridge telling you what the bridge clearance is, but not the useful one. 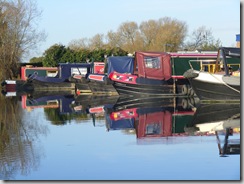 When we arrived at Aynho Weir the indicator board showed we were well into the green, but I would like to know before I get that far if it was in the red. Once through the lock we continued on to moor for the night opposite Aynho Wharf. Once tied up at about 1330 I wandered over the bridge to The Great Western Arms to book a table for tonight. Whilst in there I noticed that not only are they open all day but they also offer a free WiFi link.