As you have probably guessed we are back on Harnser again. We arrived back on board around about mid day after stopping at the new Southam Tesco for supplies. We normally bring them from home but this time we have been grandson sitting for the weekend and came to the boat straight from theirs.
The first job when back on board was to fit a new oil seal to the hydraulic filter head the old one had started weeping so I bought a replacement O  ring while at home, until this job was done  I was not able to run the engine as even out of gear the oil circulates through the filter.    The other important jobs were to light both the back cabin stove and the Dickinson in the galley to warm the boat up.
Thankfully the day was bright and in the sun quite warm, however there was still ice on the puddles and frost on the grass where the sun had not caught it. 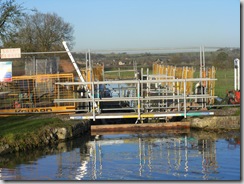 We were able to walk Magic right to the boat as British Waterways have put a bridge across the head of the lock while the lock is drained for repairs.
Once Harnser was in a fit state to run we winded in the engine arm and ran backwards to the lock moorings where we tied up and transferred everything from the car to the boat, then still tied to the lock moorings we had lunch, I then went to the Post Office in the village while Diana took Magic for a walk, it was only then at 1420 that we left the lock moorings, it something I have never done before and will probably only do  it once more when we return. With the stop plank in and the lock drained it was very unlikely that anyone else would want to  use them.
The pound between the two Marston Doles  locks was quite low which is not unusual and we got  through with no problem however the summit pound was right on weir, even so the going was quite slow and with no other boats on the move the water has cleared and you can see just how shallow it is in places and how narrow the channel is.
We continued on not seeing another boat on the move in bright sunshine, however it was slowly getting colder with a clear blue sky. Looking up it was possible to see what looked like very faint rainbows high in the sky.
We decided to moor for the night at about 1630 by the Wormleighton disused DECA radio mast.  Just after we had tied up a mink came swimming by bold as brass, straight down the canal on the surface. In the past when I have spotted them the slightest movement caused them to dive out of sight, not this chap he just ignored Diana, Magic and me out on the front deck watching and talking about him going by . I didn't bother to go for the camera as the light was fading and him being black and moving away at quite a pace I didn't think the photo would be worthwhile.
As I type this the outside temperature is only 3.4c   but the pressure is falling steadily indicating black clouds and rain is on the way, hopefully it will be back on the rise by the morning to give us another fine day.