Last nights moorings are not the quietest in the world as the church clock strikes every 15 minutes. I think it may stop in the depth of the night because the last hour chime I recall hearing was at midnight.  It didn't help that we are both going down with colds so the nights sleep was not that good. The end result was us crawling out of bed late this morning.
We set off at 10-30 and stopped just through the bridge to fill with water, while there I dumped the rubbish and noted that they now have recycling facilities there. Once the tank was full we were on our way again, as we left I was aware of a commotion in the trees behind the old coal yard, it turned out to be a Rook with pure white wings, the rest was black just like the rest of the noisy flock. 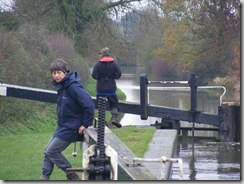 A BW chap on a bicycle accompanied up all the way to Banbury, he had his data logger on his handlebars and was inspecting structures as he travelled, he was also entering information about trees growing along the towing path.
As we came past the Spice Ball long term moorings, half of which are empty we saw our fist boat on the move in the entire trip. Passing Sovereign Narrowboats I noted that his diesel is 70p/lt. We moored for a bit by the shopping centre, first to eat diner and then so Diana could visit the shops. We had considered stopping here for the night, but as Diana returned at about 3 pm. the sky brightened up and it turned into the best part of the day, so we untied and moved out of town to moor for the night just before bridge 172 at about 4 pm.