Last night we wandered up to The highwayman for the Folk night, this pub use to be called The Wise Alderman and is right by the canal with room for one boat to moor against their gardens. It was a full moon but we didn't see much of it with the thick cloud cover.
We set off this morning at 9-30 just after a hire boat had gone by to ensure all the locks were against us. We were in desperate need of water, no showers this morning and we stopped at the waterpoint just through  Langford Lane Bridge opposite The Highwayman but unfortunately our hose connector wouldn't fit and I couldn't find the adaptor ring. It is the first connector of this size that I have come across in over 10 years and I have probably not seen more than 5 in all the time I have been boating, so we pushed on to the next water point. We remembered to hake the chimney down before we got to Yarnton Bridge which is quite low with a bump sticking down from the middle of it  and stopped for water just after Drinkwater   Lift Bridge. This is another bridge that BW have attached a locking mechanism to and when Diana opened it after initially rising it just hovered half way up, at this point Dust was coming the other way with his coal boat and we let him through first. 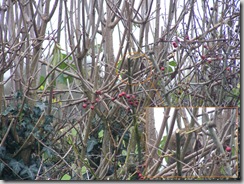 While we filled with water I spotted a brown rat making his way along the hedgerow about a foot from the top, I managed to get a photo of him, but you need to look hard to spot him as he was well camouflaged when he kept still. Once full of water we carried on under the new A 34 flyover to Perry's  Lift Bridge the last locked lift bridge on the South Oxford canal, here we were held up for about 10 minutes as a tanker was emptying the Elsan disposal holding tank and his lorry was to heavy to cross the lift bridge, so he was parked on one side and had his pipes laid out over the bridge to access the tank on the towing path side. When he had finished I opened the bridge for Diana to bring Harnser through, this time the bridge didn't lift at all and I had to cross to the far side and open it by pulling the balance beams down, when Diana had cleared the bridge when I tried to lower it it balanced out about half way up, so I had to walk on the platform to close it, surly this cant be any safer than they were before modification. After this it was a straight run to the very end of the South Oxford Canal, mooring at the end just before the rain started at 2 pm. We have been for a quick walk round the area and there is a nice looking Thai restaurant just by the bridge that we will probably try tonight.