It was quite surprising how much we heard the trains last night, when we moored here going down we didn't hear a thing.  By the time we went to bed it was below freezing with frost on the grass, by this morning it was almost down to -4. For those of you that have travelled this way over the past few years you may remember the Collie that use to insist you threw sticks for it, well I can report she is still going and now 18 years old and lives at the Mill. She doesn't go out to the lock any  more but she still enjoys a stick.
We pushed off at 10-15 in 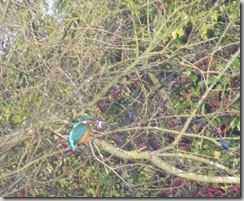 a very bright day and we saw several  Kingfishers in the first few miles and we were even honoured to see two kingfishers catch fish, something I have never witnessed before and needles to say I was unable to catch it on camera. I did get a blurred shot of him sat eating his catch.  I think the reason for all this extra kingfisher activity on this section of the canal is that they are taking advantage of the clear canal water   to catch fish. I suspect they would normally be fishing and moving up and down the River Cherwell that runs close by. 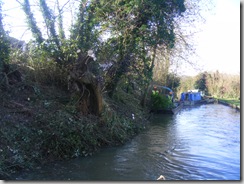 As we passed through Heyford British Waterways were hard at work cutting the offside trees and scrub, they have already made a big impact around bridge holes by clearing around the base of the bridges, but there is still an awful lot to do. We also saw other teams walking the towing path cutting the hedges with petrol hedge trimmers

We were a bit undecided where to moor for the night, we thought that we would like to get beyond Aynho where we moored on the way  down, so we carried on to finally stop for the night just below Kings Sutton Lock about 4-30 pm. We only met one boat on the move all day and that turned out to be Dave who we had been to the pub with on Sunday night, he was just dropping down in Allan's lock as we approached. As I type this at 5-30   pm it is already freezing outside.