It was a bit windy over night so we were pleased to have a secure mooring.

An early start was called for this morning as we were to meet Graham and Brenda at Thrapston for lunch. The morning show was was out as we were getting short of water, we had expected to be able to fill up here last night, but not only is the pump out not available, nor is the water point.

It was quite a bit cooler this morning, enough to need a jumper on as we set off at 8 15 am. We didn’t see another boat on the move all morning. As we approached Thrapston bridge I could see Graham moored on the visitor moorings up a small cut on our left. He had gone in backwards so I thought it best to do the same. It is a very tight entrance for a Narrowboat. The entrance turns across the flow through the multi arched bridge and then bend round almost 90 degrees so the mooring is almost parallel to the river.

The way I approached it was to just let my bows enter the navigation arch of the bridge and then start reversing towards the town mooring, I then used my bow thruster to drive the bows to the right and against the flow of the river. At this point I was travelling backwards, across the current and upstream but close to the bridge. It is not something I would have tried if there had been any more flow on the river. As I got further into the moorings I was getting clear of the river flow and just had to turn right and come in beside Graham.


Once moored we could refill the water tank again while we had tea and cake courtesy of Brenda with them and the local EA officer. Once this was all taken care of we went for lunch at The Woolpack They only do bar meals at lunch time but Brenda had a good pile of sandwiches made with brown bread, served with chips while the rest of us had ham, double eggs and chips. It was all very nice, washed down with a couple of pints of bitter.
After lunch we said our goodbyes after discussing the best way to continue my journey down stream. It was thought that to turn out or the moorings and go up stream, turn and then come down through the bridge, but I thought that as I had got in from having my bows under the bridge I should be able to get out that way. So I went out very slowly forward aiming straight across the river until the flow caught the bows and carried them under the arch, I put the rudder over hard to the right , gave it lots of power and went cleanly through the main arch, unlike the chap last winter who had to be rescued by the fire brigade when he failed to get through the arch.

We met our only boats of the day on the next stretch of river, 1 Narrowboat and the Environmental Agency’s weed cutter. This is an interesting craft as the wheel house is mount on

hydraulic rams so that it can be lowered to pass under the many low bridges, there was only 2 Mt's headroom under Islip foot bridge when we went under it so it was less when the weed cutter came this way this morning. 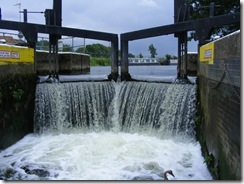 There was quite a bit of water coming over the top gates of Titchmash Lock as usual, it was suggested that we may as well not open the top paddles as the lock would soon fill with the overflow.  Once we were in the lock and it was empting we had quite a build up of foam around the back of the boat. While we were locking down the second Narrowboat of the day arrived below the lock waiting to lock up so we warned him about the weed cutter ahead. We had hoped to moor at The Kings Head opposite Wadenhoe lock but there was no space so we turned back upstream and moored below Wadenhoe Church for the night.