Last night we ate at The Crown Elton, this is probably the most expensive pub we have visited this trip but very enjoyable.
When we returned to the boat the wind had died right away and the water was like a mirror, not a ripple to be seen. Some chaps

Today we had planned to leave about 9 am as we needed to get to Peterborough, as I walked the dog along the bank I met to fishermen, a few years older than me, one said “is that your truck” pointing to our boat, I had already overheard it was moored on his favourite fishing spot. I told him we would be departing as soon as I got back with the dog and he was very appreciative. By now it was quarter to nine and Diana wandered down to the lock to get it set ready, by now many of the boaters opposite were up and about, but we had a clear run.

As we made our way down stream we passed under a concrete bridge at Wansford which carries the A1 that stands on the old county boundary of Huntingdonshire and Soke of Peterborough with the information cast on each side of the river. 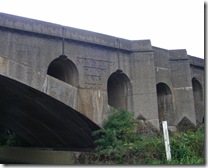 It has the date cast into the centre of the arch MCMXXVIII which I think is 1928.

Not long after this we came to what must be the prettiest mill on the whole river that stands beside Waternewton Lock.

As we pushed on we came to the Peterborough Yacht Club, a fine title for a fine body of people. This is a boat club on the banks of the Nene that not only sells diesel at a very fair price but they are also very welcoming to visiting boats and boaters. They have a section of there quay right outside their club house that is reserved for visiting boats with a big sign saying welcome to visiting boats, how different to some of the clubs we have passed with their Private and No Mooring signs. I stopped and filled up with diesel at 80p/lt but they only do a 60/40 split so not good for live aboard boats that don’t move much.
As we waited for Orton lock to fill we were joined by

another Narrowboat, we had only seen one other all morning. Below the lock there is major construction work on-going and the temporary lock landing is well downstream of all the construction work. The water flow below the lock has very confused eddies which draws the boat out to the right as you leave the lock. The boat we shared with was going to moor for the night at the Rowing lake like us, but in our case we had to go into town first to pump out the loo tank. That’s one of the good things about this area, the pump outs are free, so we were able to give the tank a good flush out. Whilst there we also topped up the water tank, that’s one of the poor things, you can go a couple of days without seeing a water tap so you need to fill up when the opportunity arises. The one in Peterborough is like the ones on the Thames, a 1” fire reel so the tank fills in minutes. I wonder in fire hoses are made from food grade pipe?
This exercise was followed by turning round and heading back upstream for 20 minuets and then turning sharp right into the stream that runs alongside the rowing lake to moor at the end.