On Thursday Diana and I hired a Canadian canoe from Rowan Craft at Geldeston for 3 hours. It was a bright sunny morning with little breeze.  We set off from the boatyard down their cut and under the disused railway bridge. From here it was passed the 2

hr.. visitor moorings that are very hand for walking into the village to visit the Wherry pub or buy home made chutney from the farm shop. It was a straight run from here to the junction with the river Waveney where we turned hard left towards Beccles. There was very other little traffic about but we had been warned that the Broads Authority weed cutter was out, this was one of the few boats we were to meet on our trip. When we 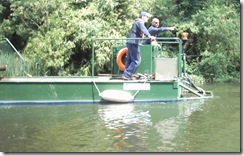 did meet it they took the trouble to stop and tell us that a grass snake was swimming across the river, we stopped and it swam straight into the side of the canoe before turning round and heading back from whence he came.

Just after that we were overtaken by another canoe that had been hired from Beccles, it looked a lot easier to propel than ours did so I may enquire about hiring one of them next time.

The next vessel we saw was Big Dog Ferry, this runs from Beccles Lido to the Locks public house on a regular schedule.

The only other boat we saw was a small aluminium dingy powered by an outboard engine. There was only one chap on-board and the bows were well out of the water. We only went as far as the pump station before turning round and heading back upstream. There was only a light breeze blowing down the river but it made a surprising difference to our progress.
Back at the junction we 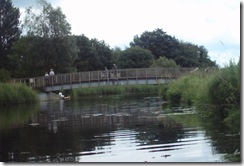 turned left again to follow the Waveney towards it source and it wasn’t long before we reached the head of navigation, there is not chance of missing this as it has a low foot bridge crossing the river, this takes the footpath from the Locks pub to Barsham. It may be low and it may be the limit of navigation but in a canoe you can slide under it quite easily, which is just what we did and carried on upstream for about another three quarters of a mile. before turning round yet again. In years gone by sailing wherries you to go all the way up to Bungay and beyond. We are going to see how far we can get another day.
On our way back downstream we turned off to the left just before the bridge to see if we could get round to the tail of Geldeston lock, or to use its correct name Shipmeadow Lock. The bridge that marks the limit of navigation is actually on a new cut that by passes the lock. We were doing quite well round the horseshoe bend and probably over three quarters of the way there before our way was totally blocked forcing us to go back. We passed back under the footbridge and then up the old line of

the river through the lock, this took us in front of The Locks inn and the BA 24 hr. visitor moorings before going through the old lock chamber and under another very low foot bridge, its hard to tell where the old navigation went from here as its so overgrown with reeds and trees, we did try creeping round to the right but still couldn’t join up with where we were earlier. 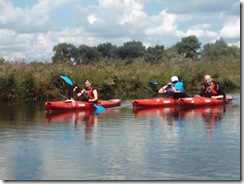 By now time was getting on and we headed back to base, On the way we met another group of boaters who we think had started at Beccles and were from Gresham School as their trail was at the boatyard when we arrived waiting for them, the only problem was that was not where they were heading for. 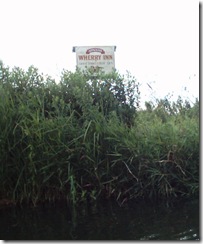 After leaving the Waveney at the Tee  junction and heading back down towards the boat yard we turned left yet again down one of the dykes, this turned at right angles and ran parallel to the main dyke but turned out to be a dead end just short of the yard so for the fifth time we turned round and retraced our steps. Back on the main dyke it was hard left again towards the yard, but instead of going under the old railway we looped pound a short cutting and had a look round all the moored boats.

The railway bridge is far to low for anything larger than a rowing boat to pass under so it was necessary to make a new cutting round it for boats to enter and leave the yard.

We hired the canoe for 3 hours which cost us £22 and included the use of buoyancy aids and a waterproof bag for our valuables.

View  the route of our Canoe trip in a larger map

Posted by Brian and Diana on NB Harnser http://nbharnser.blogspot.com at 17:35