The Big Move is OVER Floods Ferry

After an undisturbed night by the rowing lake we woke to a sunny morning, again we had to set sail earlier than usual so after saying goodbye to our neighbours, well a wave, we were away by quarter to nine and heading out to the main river, down through the town and passed all the boats moored against the park who had not been cut adrift, set on fire, spray painted or even had the stuff nicked off the roof over night.

Opposite the park we turned right off the main channel down Morton Leam for about half a mile, passed Peterborough Boat 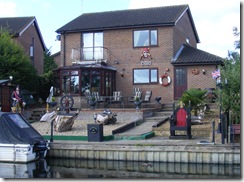 Centre where diesel id 88p lt and a house that is obviously the base for the local pirates  until we came to Stanground Lock. We arrived at 9 30 but were not booked through until 10 am. While we waited a second Narrowboat arrived and tied beside us, they were booked for 9-45 and as soon as the 9-30 boat coming off the Level left they were on their way down, closely followed by us. Chatting to the lady lock keeper I found out that the lock has been quite busy for the time of year and that she had another 15 boat booked for today. 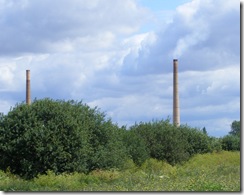 It was very pleasant meandering down the Middle Level in the warm sunshine. There was not enough wind to turn the wind turbines and the smoke from the brickworks was slowly drifting skywards. 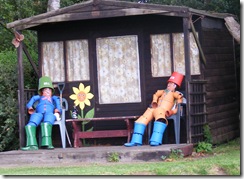 It wasn’t long after this hat we came upon another strange dwelling that caught my eye.I am not sure who the occupants are but I feel sure I have seen them on TV at some time.

The next place of interest is Whittlesey with its very tight

right angle bend, it is possible to get a full length Narrowboat round it just, but you will probably need to use a rope or pole to do it. Just prior to the bend there are two pubs, just about opposite each other on ether side of Kings Dyke. One is The Boat and as you can see is bright blue the other is The Hero of Aliwa.

We stopped for lunch on the moorings just above Ashline Lock next to the recreation ground and while we were there several boats came up the lock and a Narrowboat went down, When the last pair of cruisers came up we went down, as its necessary to leave this lock empty, so it saved them the trouble of turning the lock after leaving.

The next part of the Middle Level is fairly straight with very little of interest until you come to the Meridian Line which is symbolised by a plaque. It was not much further to our new mooring at Floods Ferry. When we arrived there were several empty berths and we had no idea which was ours. so we slipped into a vacant slot and walked up to the office, unfortunately there was no one there so I have left a message on the answer phone and asked them to contact me when they return so that I can put Harnser into the correct spot.

Hope you enjoy the Middle Level - and its notorious weed! We enjoyed the dead end bits beyond Lodes End Lock by Bill Fen. (Lyn S. at BF administers a Middle Level plaque which you can get by visiting the four far flung corners).

Wow it's a very long time since I 'Watched With Mother' during my childhood, thanks for reminding me just how old I am!! LOL
http://en.wikipedia.org/wiki/Flower_Pot_Men
Kevin

Snail got round the Whittlesey bend without touching the sides.Over 70' may be a problem!
Glad you're enjoying the MLN. Praps we could come over and see you Oct/Nov when we're back in Norfolk for more hospital stuff.