After we had eaten dinner we walked up the hill and round the church, the view across the hills from the top is quite good.

The overnight  mooring was a very quiet, the only thing to disturb the evening was 3 people in a canoe coming by and back in the dark, not in my opinion the most sensible thing to be doing. our neighbours for the night were two long horn cows with a calf, but they didn’t disturb us at all.

This morning we were away at our normal time of about 10 am. the boat moored a little way upstream left at the same time so I went upstream to where he was moored to wind as the river was a bit wider there.
The morning started off very warm and it was strange to be going along with the hot sun on my neck and able to see the rain falling in the distance, it did manage to catch up with us about half an hour before we moored up for the day. 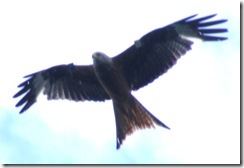 ran beside the woods and I managed to get a few photographs, looking at them after we had moored up it looks as if this one has a pair of tags on his wings, but I may be wrong.

We met a couple of boats on our way down, the first was heading back to Milton Keens as they only had a weeks visitor licence, the second was on their way out from the Middle Level they had bought 3 one day licences at £7 to do the Nene and then two 1 month licences for BW waters.

We have moored for the night above Ashton Lock on the weir stream, This is quite long but there were only 2 spaces big enough for a Narrowboat when we arrived a 1 p.m. We luckily chose the first. After lunch the boat that had been moored in front of us last night arrived and as they had helped us moor I offered them to breast beside us, however they felt they could get in the gap further down, so we went to take their ropes. We got them in OK but then found there was a wasps nest right beside their fore deck, needless to say the decided not to stay and have moved to moor on the outside of a friends boat.

Since we have been here a wide beam has been down, turned round and left, we did offer him the chance to breast as he went by, which is much more than he did for us last night when he was moored outside the pub and we were looking for somewhere to stop.

A Moored Narrowboat has decided to move on, he untied got to mid stream and then lost drive. I started Harnser, untied and we went and got him and towed him back to where he was moored, so its gear box or drive plate problems for him.

We have had heavy showers with thunder and lightning and to top it all the EA managed to squeeze their van passed all the mooring pins to drive down to the lock and back.

Posted by Brian and Diana on NB Harnser http://nbharnser.blogspot.com at 15:08