Last night was warm and we went to bed with the back slide open. We woke to sunshine and decided to close the slide, good move as by 8 am it was raining, followed by a thunder storm and real rain. 10-30 am  and we thought we better make a move, wet weather gear on and off we went. The board on Goring Lock said self service but when we walked up the locky was just locking two boats in. he had been called to Cleeve lock to reset it and had just returned.By now the rain had just about stopped, as we left the lock L'Orage was about to enter. 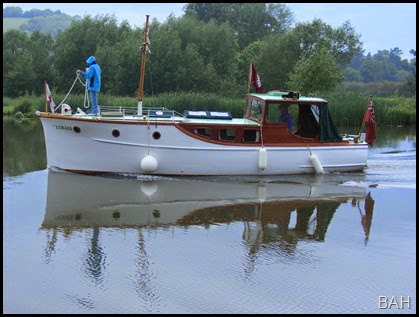 You can see how still the water was following the rain.  Looking back at the lock the cloud formation in the Thames Valley below the lock was quite clear.

A few of the youngsters at the sailing club were out getting some tuition in the very light winds. 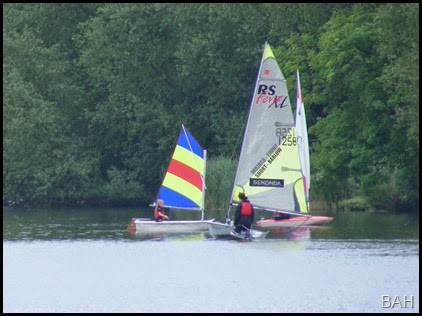 We passed another old boat, this one not quite so glamorous sitting in a boat shed so she is under cover and floating, it probably belonged to the Thames Conservancy at some time of one of the river contractors. 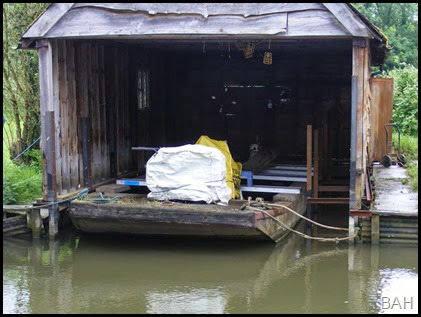 Made of wood with iron edgings to protect her, maybe she is still working, no reason why she shouldn’t be.

We encounter quite a few rowers who were much more thoughtful to other river users than the ones yesterday evening, 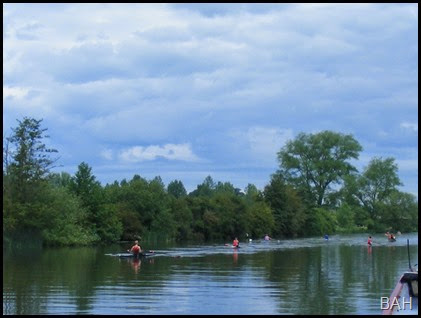 I didn’t tell you about them, The river was running quite fast in Goring just below the lock where the weir discharges and a coxed 8 came up the river and stopped just before the lock cut, where they turned at 90° to the river and had a rest after their exertions against the flow completely oblivious to boats trying to 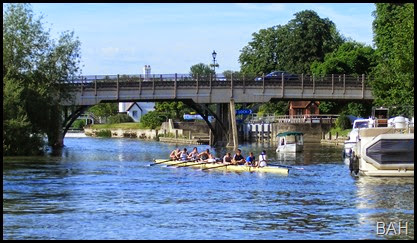 leave the lock. The small boat coming down had to go round their stern with the flow pushing him on to the moored boats. When they did set off downstream they just drifted down with their training boat talking to them, again oblivious to the large hire boat trying not to run them down whilst maintaining steerage.

There were quite a few boats moored at Wallingford  just through

the bridge. I am not sure if they are free during the day or if they hit you for cash as soon as you stop, as we didn’t plan to stop it didn’t effect us.

This work boat only got beached last winter, but already it looks as if its been here for years, I do wonder if its worth the money to refloat it.

Our destination for the night was the mouth of the River Thame a short way below Days Lock at Dorchester. Several boats moor against the bank along here but it bit of a clamber off a Narrowboat, however there is some very nice wood piling just at Narrowboat deck height around the entrance to the River Thame under the foot bridge and luckily this was free, so I backed in under the bridge just like last time with the bow just poking into the Thames. 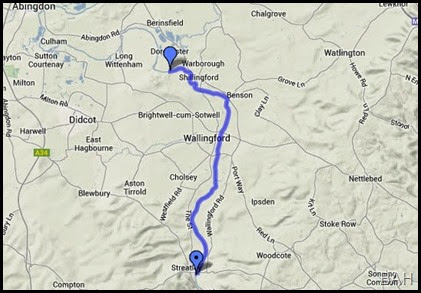