Last night we were moored almost over a culvert, there was a van and pump in the field beside it and hoses running under the canal, the culverts was damp but no water in it. This morning there was a second van several men, the pump had been disconnected and the culvert was again full of water, is this a good sign or a bad one?

We started at our normal 10 am and just through Shipton bridge passed a hire boat who were getting ready to set off. We had to wait for a boat coming down in Shipton Weir lock and by the time he was ready to leave the hire boat had caught up so we invited them to share the lock.

There was very little flow on the River Cherwell and we were getting along well. we had been warned by the boater coming down that there was a lot of dust as it sounds as if they are taking the old cement works down, the only thing visible is the chimney and a pile of crushed concrete. 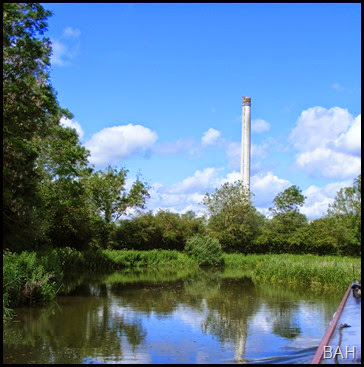 I wonder how much longer this will be standing.
There was a boat moored below Bakers Lock and it was covered in white dust, the amount we collected while doing the lock was quite surprising. Leaving the lock a boat arrived at the top so that was another we could leave for someone else to close.

It was a bit congested through passed The Rock of Gibraltar pub at Enslow with 2 CaRT boats moored between the two bridges and then boats moored both sides of the cut by the pub, with one coming the other way just to add to the fun.

As you can see bridge 215 is now in rather a bad way, will this be the next stoppage on the South Oxford, I would imagine that the missing part of that wall is in the bottom of the cut, how long before the rest follows. 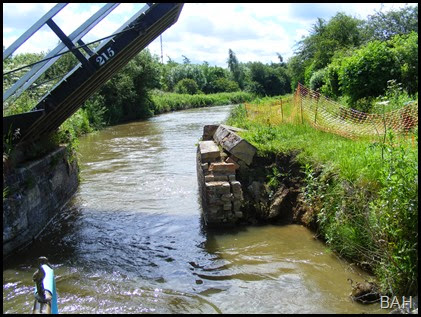 We  carried on through Heyford and found only 1 boat moored on the 14 day moorings by the station, I expected it to be full, but there were several round the bend from there with 2 boats moored on the offside just to make it interesting. One of them has been there as long as I can remember. The lift bridge now carries an advertisement for The Bell, I wonder if CaRT get any benefit from this. 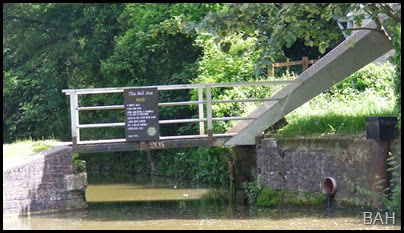 Pushing on North we met very few boats and there were loads of places to moor. I don’t know if its as a result of some new policy of CaRT or whether the contractors have just mown to the edge in some places where there is piling but we saw several nicely mown spots big enough for just one or two boats  to overnight. Whoever is responsible I for one find it very welcome.

As you can see we moored well back so not to impinge on the privacy of our neighbours. The only reason we chose this spot as the railway is the other side of the hill from here. 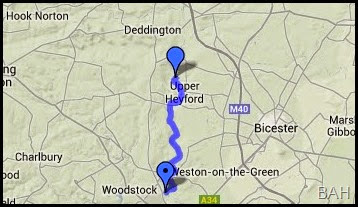