We were about to set off at 10 30 am when a boat came down behind us. We had see this boat a few times since we had been on the K&A as they moor bank side at Caen Hill Marina. The reason I remembered it was that it is called Avalon so Diana set the swing bridge for both of us and waved them through. By now all the boats at the visitor moorings had already left.   Avalon was at Newbury lock setting it when we caught up and we shared the lock together.

I lead the way through town, the flow was nowhere near as fierce as when we came up but you still need to watch the bushes on the right hand side and not get over to early for the bridge. 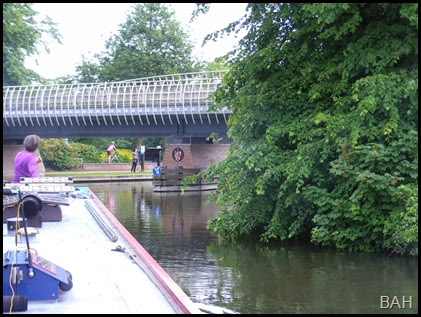 There was a boat moored in Newbury that had a fine grass roof. I am not quite sure why people do this, it must present quite a corrosion risk for the roof.

As we lead through tow we caught up with another boat at the next lock and so shared with them, half a paddle on the bottom gates going down. We were pleased that they caught up with a hire boat at at Ham lock and we were able to share with Avalon for the rest of the day. They also planned to stop at Woolhampton tonight. At one of the locks someone has made a poor attempted to repair the worn door mitre by screwing some neoprene strips on it, needles to say they are all ripped off.

I don't know why CaRT don’t just put metal edges on, I know they wouldn’t seal that well, but they would be better than the 2” gaps that are there now.

As I said the other day I have been playing with Waterway Routes, http://www.waterwayroutes.co.uk/ one of the problems is seeing an I pad screen in the sunshine, here is my Blue Peter answer to the problem. 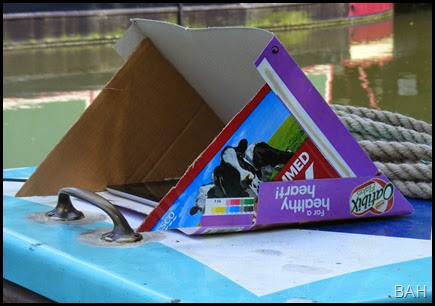 Sticky back plastic, a cereal packet and a milk box, maybe not Tracy Island but it worked. I even cut a slot for the charging plug (because I didn’t make it wide enough without).

A short way above Oxlease swing bridge there was a tree down, right across the towing path and half way across the river.

You can see Avalon negotiating it. We stopped at Oxlease swing bridge to operate it and let Avalon go on ahead.

We arrived at Woolhampton to find all the moorings full bar one and Avalon was in front, they invited us to moor alongside, but I elected to back up and moor by the bank. Mistake, I couldn’t get within jumping distance so went forward and breasted up. I had barely tied up when a boat that I had just reversed passed and then came forward by pulled away and came passed. Why she didn’t say she was leaving in 5 minutes I don’t know, so reverse again into her spot. We had been here about 10 minutes when Diana said there was now a space at the front of the visitor moorings, so off we went again and are now moored by the end of the lock moorings, better than on the bottom on pins.

We were moored opposite Avalon at the bottom of Caen Hill and have been playing leap frog ever since! We are now tucked up at the Newbury Boat Company and going home today. Enjoy your travels and we WILL meet up one day!