I think it rained most of the night, it was every time I looked out but miraculously it stopped dead on 10 am as we were about to set off and even the sun came out, so all the waterproofs were pealed of and we made our way down through Welford Lock (Cadbury), I had been to turn it in the rain ready. For some reason this lock has flowers on it, we have not seen this on any of the other locks. 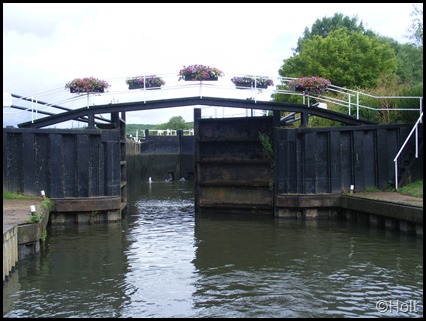 Most of the locks on the upper Avon, above Evesham have overnight moorings above the lock at the end of the lock moorings and really in a lot of cases its the only place to moor. Some are 48 hr and some only 24 hr but they are very welcome.

After this we met a continuous stream of Narrowboats so all the rest of the locks were with us.
This is the first time we have been on the river since the upper and lower river trusts became one and one thing that is very noticeable is that the signage has improver. 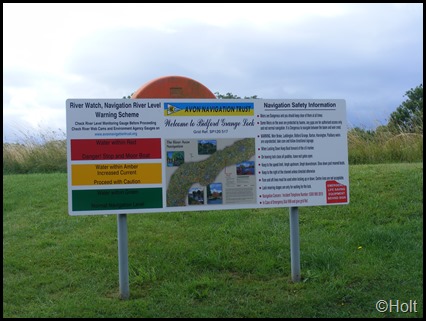 Also the water level indicator boards are all very visible. 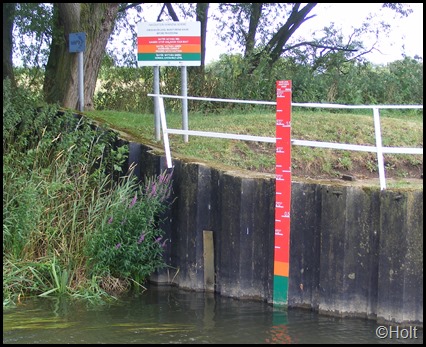 There was a notice at the lock warning of ongoing work at Bedford road bridge and to proceed slowly, when we got there the ongoing work was well clear of the navigation arch,

but even with the low water levels the flow still made the back of the boat twitch as we passed under the arch. 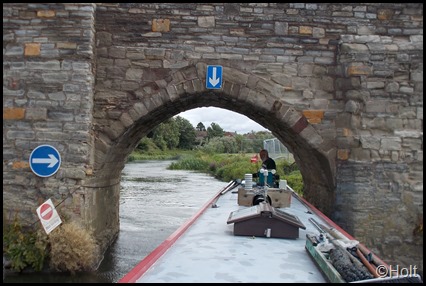 I think I may have had the coat on again now as we had some very fine drizzle and its easier to put it on sooner than later. Robert Aickman lock was looking very splendid, the new trust has

stopped using the names like this given to the locks after restoration and only refer to them on their signs as Harvington New Lock etc. I suppose that it gives a better idea where the lock is situated. Some of the lines of approach to the locks on this river are shall we say, interesting.

Beside Offenham Lock ( George Billington) there is a somewhat interesting structure and I would really like to know what it looks like when its open, so if anyone can point me to a photo of it I would be grateful. 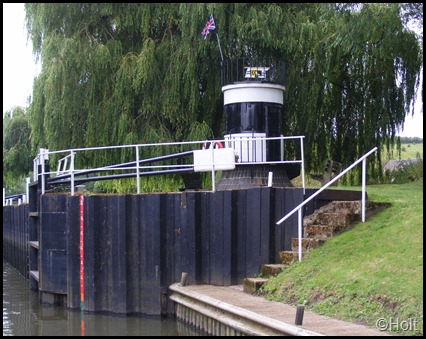 At Evesham Lock there was a boat approaching the lock from below so the lock was against us, I put the bows in against the top gates to let Diana off and the stern was immediately dragged down to the right. There is a small notice warning of a strong current and what I didn’t know was there is a hydroelectric generator in there to the right hand side of the lock and the flow is very strong. I managed to get the stern round a bit and reverse from the gates, once in line with the I backed up to the visitor moorings and waited there, It still took quite a bit of power to cross into the lock. The Trust assistant who was on duty checking licences told me that they had received a high water level alarm for Warwick from the EA this morning, but level here had not moved at all.
We have moored for the night against the gardens in Evesham where the town river festival is held each year. 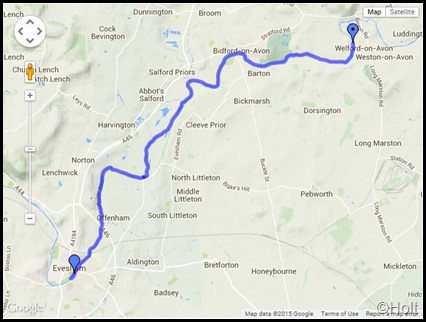 Hi Brian & Diana,
I do hope you have a good night at Evesham Gary & Carolyn NB Inca didn't recommend it recently http://nbinca.blogspot.co.uk/2015/07/warning-dodgy-mooring.html bit late I know but just catching up with your posts since Bodymoor Heath , loving this trip.
Cheers
Ade

Just to say we had no problem at all in Evesham and there were probably 8 other boats there as well.
Brian on Harnser

Glad to hear it, faith restored!