We woke to a lovely morning, the sun was out, there was no wind and the Cockerels were crowing and boy did they know how to crow. It was a lot different to the 10mm of rain we had had in the previous 24 hrs

We set off at 10-30 am and immediately met a boat so that helped the lock situation. We stopped just above the lock at the services to take on water and dispose of rubbish. The day was most pleasant but a little cooler than of late, the towpath was full of joggers all going at different rates, some in groups chatting some alone checking watches as they went. About a mile north of here you come to Hinksford with a long length off offside private moorings, this meant I was travelling slowly when I spotted some fishing rods out over the canal laying on the tow path. I immediately stopped and two lads came running, winding in rods as the passed them, there were two more further up. It turned out they had at least 5 between them and even though I stopped before I reached the first one, his bate was actually behind me but luckily for them close to the towpath. The eldest lad was in such a rush his trousers had slipped down below his 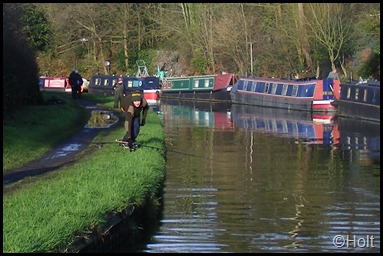 pants as he wound the lines in. Unfortunately he turned slightly just as I took this photo, but you can just see the orange glow, it brought a smile to our faces,

The Botterham staircase lock was set ready for us with top pound full and bottom empty, it must be due to leaking top gates as there is no way a boater would leave it like that.
Yesterday I posted a photograph of the stop plank groves above Stewponey Lock, well the ones slightly further not are not as ornate with the nice curves of yesterday but still very practical 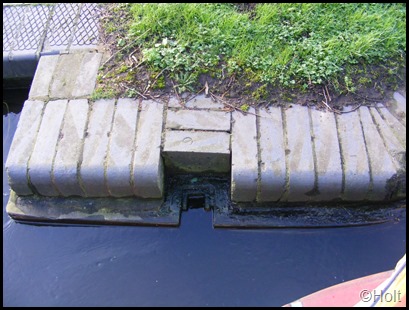 We stopped at Sainsbury’s at Wombourne to replenish supplies, Its a handy stop with visitor moorings and rings right beside bridge 43. When we returned from shopping it had turned quite dull and quite a bit cooler. As we approached The Bratch it started to spit with rain and as I entered the bottom chamber the wind picked up and it was throwing it down, this carried on all the way to the top. The top gate of the flight is leaking badly due to all the rubbish that is trapped in the gate paddle, when you wind 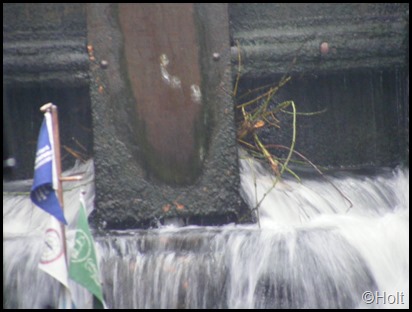 it down it doesn’t bottom out but just bounces on all the branches in there.
Once clear of the flight we moored for the night on the visitor mooring rings, needless to say within ten minuets the rain had passed. 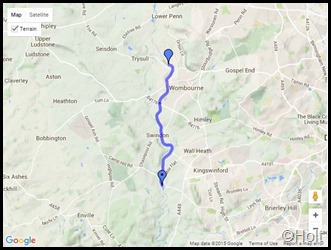 4¼ miles, 10 locks including a staircase and The Bratch  in 3¼hours.