What a night last night, we went to bed with bright moon light but it soon changed to heavily gusting wind and we woke to very heavy rain, this resulted in getting up being somewhat slower than normal. We had just on ¼” of rain over night, I am sure some places were worse off than us.

We were ready to set off at 11am, I had the full waterproofs on and went out to brave it. Lo and behold it stopped raining, the sky turned blue and the sun came out. I really should get dressed up like this more often as it seems to work.

Just before the M54 motorway there are some long term moorings and this motorised butty caught my eye, you can see the speed control on the tiller, 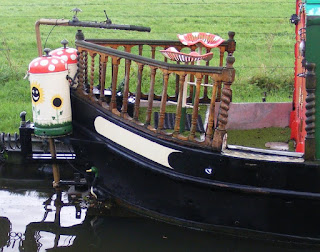 I have no idea where the gear change is, I rather like the duck standing on the anti cavitation plate. The portholes are diamond shaped, not round and the stove chimney looks like a log, 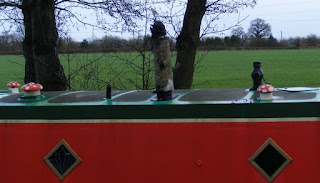 at the bow there is a penguin on lookout above the jaws. 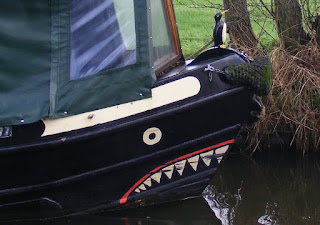 The moorings also had a rather fine portable heater, ideal for a late summers evening when having drinks on the moorings. 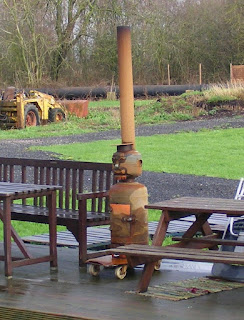 The first boat we were to meet today was in the long narrow section which is only to be expected I suppose. We manage to time it so we both arrived at a passing spot at the same time so no one had to stop or back up.

Just after passing Autherley and Aldersley Junctions we met the second boat of the day, it was also here that I saw a pair of Dabchicks, or Little Grebes. Surprisingly they didn’t dive until after I had passed them, maybe the ducks gave them confidence. 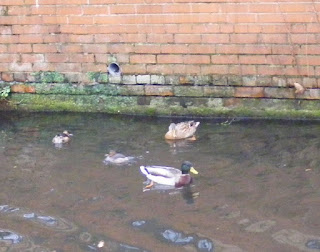 We did 2 locks and decided to stop for the day just before Dimmingsdale Bridge, but got caught in a quick but heavy shower just as we tied up.
The reason for stopping here is that in about 5 miles there is The Bratch, a flight of locks that normally has a lockkeeper on duty. Tomorrow being Christmas I wouldn’t expect to find him working and I was not sure it the locks would be open for passage without him, so 5 miles and a couple of locks would give us a bit of travelling to charge the batteries if it was closed. I have since found out that he is not working but the locks will be open, so we can ether stop above the locks for Christmas afternoon, of drop through them and go a little further. We need to do 4 hours to recharge the batteries each day.