There had been several boat by before we set off all going down hill but for some reason Beeston Iron lock was half full. This lock requires a bit of care, although it was built for broad beam boats you can no longer get two full length Narrowboats in side by side 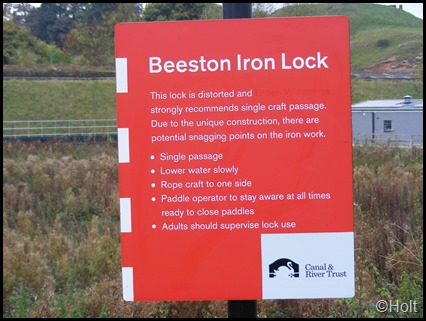 as the walls have distorted. CRT have put several notices up warning boaters about this.

The chamber is made of iron and over the years steel bar has been screwed on to re enforce the joints, this are ideal for catching any protruding steel work on the hull like the base plate, anodes and rubbing strakes. Also as the couldn’t cut recesses into the sides there are no ladders so if the boat is lowered without you you can’t get on,likewise if your sat in an empty lock you cant get out. 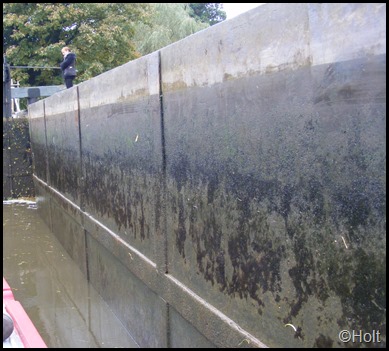 Even the upper cill is iron with a concrete pad set on top of it. 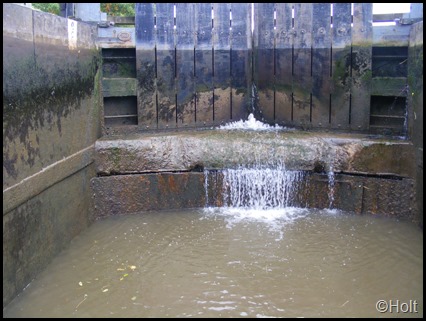 As we entered the lock a hire boat arrived below which was well crewed and the operated the bottom gates and paddles for us, although a hire boat they were obviously well experienced with one member walking up to the next lock to get that set ready as well.

Below the lock we could see the deer on the hill. These hills hold some large fuel tanks that were in use in the second World War and built by the RAF They have not been used for some years now, but even today there are lots of oil pipelines running through the area and probably the site which still are in use. We only went as far as the 48 hour moorings above Wharton’s lock from where we walked up to Beeston castle, it took us much longer than expected as although the footpaths are all well marked there is no indication which way to go when you hit the road below the castle, we went right and we should have gone left as you can see from the map below which involved walking all the way round the perimeter of the castle site. We came back the shorter route. 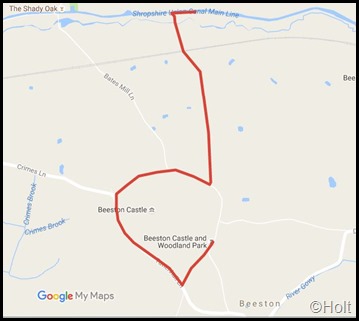 The castle is now managed by English Heritage so it cost us £6 each to get in. Once in you can climb all the way up to the Inner Keep which gives some spectacular views over the Cheshire plains.

The Inner Keep is separate from the outer Keep by a large  ravine which would have made it difficult for anyone to invade the castle provided they couldn’t starve them out. The old 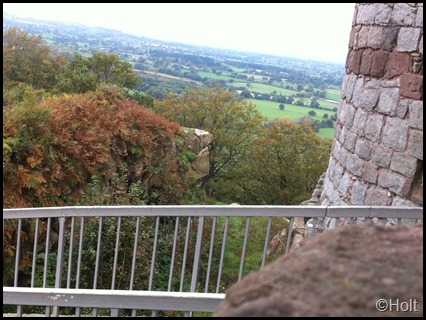 drawbridge has been replaced by quite a steep concrete bridge.

As we made our way down again the entrances to some of the oil bunkers were quite obvious and as we walked down the foot path and under the railway bridge we were to see several oil pipeline signs.
Once back on the boat it was lunchtime with several boats going by but all heading in the same direction as ourselves, things did look up as just as we finished lunch a boat came up the lock so it was turned ready for us.

The next point of interest was Golden Nook Farm long term moorings, I think they are probably a bit longer now than last time we were this way, I measured them on Google maps as being 1½ miles end to end, and all at tickover. The photo was taken around the mid point and as you can see they run right out of view. By now we were looking for somewhere to moor for the night so when we saw a nice bit of campsheding/piling about 100 feet long that was us for the night, the nearest village is Waverton which is just a few fields away. 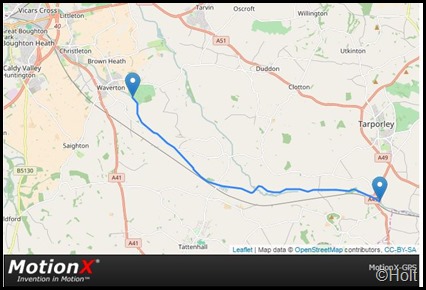