Last night we went out for dinner with Richard and Rachel to The Heart of England which is almost canal side at Weedon. This is owned by the same brewery as The Boathouse in Braunston and although it was all right with good service we didn’t think it as good as the Braunston one.

This morning we said our goodbyes and set off at 0945 hrs. in pleasant weather. The first stop was Stowe Hill where we topped up with diesel at 82p. 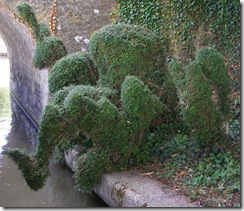 For those of you who know an old Springer Narrowboat called Badger, she is still looking splendid moored on  the offside as you approach Gayton. She obviously went to a good home. 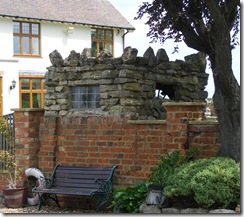 Just down the Arm on the right hand side is a rather strange summer house, well I assume its a summer house, it could be a granny flat.


We stopped for lunch opposite Gayton Marina, to

get into the marina basin the swing bridge has to be opened, this is fully automated, complete with road barriers and audible warning bleeper, I don’t know if its normally left open to boat traffic or road traffic but I wouldn’t want to spend to long listening to it. 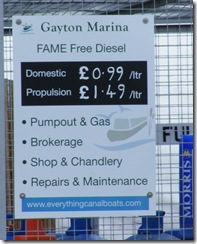 Gayton sell FAME Free red diesel i.e. it doesn’t contain any Bio Fuel. Bio Fuel can be hydroscopic and hold water which could lead to diesel bug. but at the moment it is 99p lt. for domestic and £1 49 for propulsion.


Following lunch we headed off to the locks, we couldn’t see anyone ahead of us but there was a boat following. We arrived at 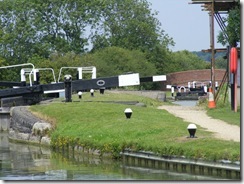 the top lock at quarter to three and as expected the lock was empty, with a single top gate and mitred bottom gates when they leak they tend to empty, but there was plenty of water in the flight so no problem. After doing the second lock we caught up with another boat. At first we thought he was single handed but as it turned out he had a disabled wife who used an electric scooter to travel from one lock to the next, she was able to stand to raise the paddle on the towing path side and push the gate open but was unable to operate the bottom gates or cross the lock. Diana went ahead and told them just to leave the bottom gates open when they went out as we would pick them up, but even so they were very slow and in most cases Diana helped to open the bottom gates as well while I waited in the lock above. 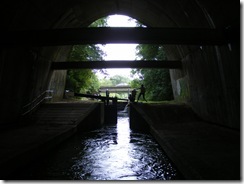 We followed him all the way down to lock 13 where he had pulled over as his wife was unable to negotiate the slope under the motorway and allowed us to pass him. In return we back set all the locks for him.


We moored for the night at quarter to seven by the flats just above the bottom lock as I didn’t fancy going out onto the river this late and then trying to find somewhere to moor e . The second boat to come by kindly informed my that a friend of his mate moored here last year and got untied during the night. I wonder how many places on the system some one has not been let lose at night and its only a canal, not a flowing river.

Northamptonshire is my old 'boating ground' ~ I enjoyed visiting and returning with you to all the places. I used to live in Gayton Marina as the security boat on Kestrel. Northampton town, as you were told is not a good place to spend the night. Boats often sprayed with aerosol paint, items stolen from the roof and nearly always set loose.
Margaret

We've moored in Northampton many times under the big yellow bridge (which has CCTV) on the river and that's never happened to us or anyone around us.