By the time we turned in last night I wasn’t feeling to good with a thick bunged up head and a good start to a cold.
Sometime after midnight we could hear the revellers singing away as they crossed the bridge, good move not mooring with the stern under the footbridge. To cap it all we had moored in the bottom of a Rookery and I had no idea they could make so much noise, the didn’t even wait for dawn to make a start, it was worse than foxes calling to each other at night, so all in all not the best nights sleep.

This morning we wandered down to see Joe on NB Yarwood who was moored at the far end of the town moorings.

We pushed off in bright warm sunshine at about 1030 am. but it almost instantly turned to a snow shower but didn’t last long and the sun returned. In the shelter of the town it was quite pleasant but once out into open country the cold wind took over from everything. I gave Maureen at Marmont Priory lock a ring as we passed the 20 foot river just before the wind farm and left a message on her answerphone. When we arrived at her lock Diana rang the bell and started to work the lock, but it wasn’t long 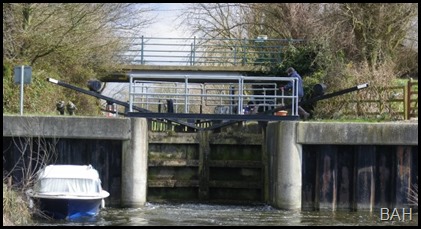 before Maureen appeared and helped us through, which was handy as she told me there were three boats coming from Salter’s.  We met the first one just before the bridge it Upwell and I held back for him, the second was on the straight but the third I was half way through the bridge by Upwell Church before I saw him coming the other way, so he had to stop and pull over to let me out. At least we didn’t meet one under the bridge at Outwell which is on quite a bend.

One of the houses at Upwell has a good store of firewood ready for next winter, all he has to do is split and store it. He has even used some as a foundation for his shed. 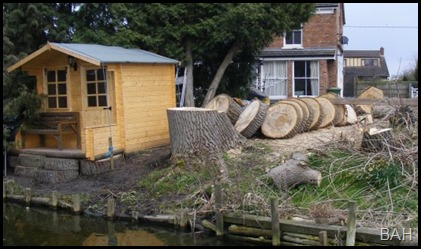 Its been a good day for spotting Kingfishers and we saw a pair on a branch near Marmont Priory Lock. The lower one is side on and doesn’t show up so well. 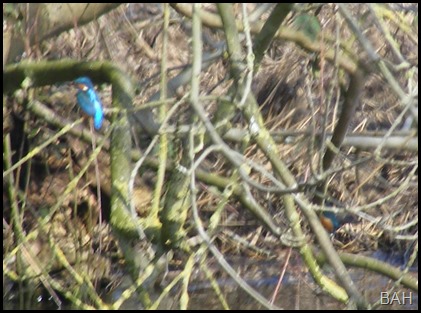 We arrived at Salter’ Lode lock about twenty past three, almost 5 hours after leaving March and moored on the lock landing ready for the morning. We will see Paul, the lock keeper later when he takes his dogs for a walk. It is slightly warmer now with a temperature of 4°C outside and a pleasant 26°C her inside