Well it looks like the summer is over, 10AM this morning the fishermen were back around the bow of the boat and as we pushed off it was drizzling, It did stop after a about an hour but the sun didn’t mange to break through.  We arrived at Stanground lock about 15 minutes early and Tina was opening the gates for us at 11AM. There was a bit of delay getting through as something was jamming the top gate half open so she had to deploy her grappling hook to clear it.
We had a steady run down Kings Dyke and all the way to Whittlesey. The lock was against us so I moored outside the leisure Centre and while Diana nipped into town I set the lock, as soon as she returned we were on our way. 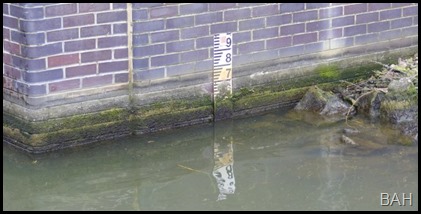 I think the level below the lock may even have been a bit lower than when we came up on Sunday so we had a mile or so on tick over until things improved.   Once past Angle Corner we were on wide deep water and were able to get back to normal cruising speed. The strange ting was that for the entire journey we have seen very few fish but in the last half mile we had a dozen Pike break the surface as we travelled along. We returned to out home moorings at about 3.30PM felling much colder than we did yesterday at 6PM.

As we were back on the mooring in good time we decided to take the car and see how work was progressing at Marmont Priory Lock, all looked well and in working order with no sign of notices, barriers or stop planks. We came back via Three Holes to see if we could see the new moorings, they also look complete on the left hand bank after passing under the road bridge, so we will have a closer look next time out. If you do come this way by car make sure you have sufficient diesel, its £1 65p a lt. at the moment at the local garage. The next stop on our way back to the boat was Benwick where the council are replacing the foot bridge. This is shown as a Navigation Stoppage on the Middle Level Commissioners' web site, but it looked very passable with scaffolding under the old bridge so reduced headroom. You can see the red netting they have draped across to act as a height gauge. The photos is fussy as the light was getting very poor by the time we visited. 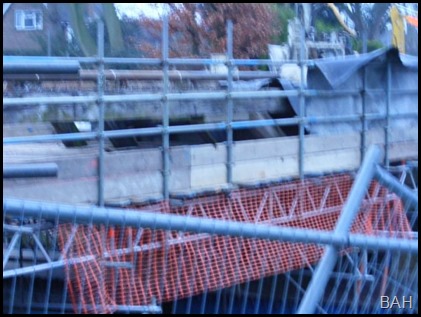 We will also check that out next time we come this way.