Yesterday I posted about an Essex fitting leaking and have had enquiries as to what they are. Basically they are a fitting that you can put in the side of a tank and then connect a pipe to. The whole thing can be assembled from outside the tank, The reason I fitted two of these was to have the water heating coil in the Dickinson stove thermosiphoning hot water through the cylinder.

As we returned to the  boat last night after having an Indian Meal at the Shah Jahan the cars were covered in frost and the sky was crystal clear, how different to this morning when we woke to rain and snow. This was after first being woken by the swans and ducks tapping on the boat and one even tapping on the mushroom vent on the roof.
We didn’t set off until 11am. we waited until the rain stopped, but as we cast off it started to snow, but soon this turned to rain, it was cold and the wind was starting to freshen. By the time we reached Popham’s Eau it had stopped raining but was feeling decidedly cooler in the breeze now we had lost the shelter of the town, I started to wonder why we were here.
We turned right down Popham’s Eau which was slightly moor sheltered as the wind was at right angles to us so the high banks gave a bit of protection. At the end of Popham’s Eau is the village of Three Holes, this village is quite famous for having the most expensive petrol and diesel in the Country. Three Holes is also the junction of three waterways, Popham’s Eau, The Sixteen Foot Drain and the Main Level Drain, we turned left under the road bridge and went about 200 Mts. down the Mail Level Drain to the new public moorings that have just been installed by the Middle Level Commissioners and paid for by the Inland Waterways Association.

The moorings are not very long but there is a post set into the Drain bed a short way each side of the moorings so that 2 or more boats can use the moorings at once by mooring one end of the boat to the post and the other end to the jetty. Two 60ft Narrrowboats can moor like this with ease. The problem we found is that we can’t get the bows close in to the jetty as the water is not deep enough. 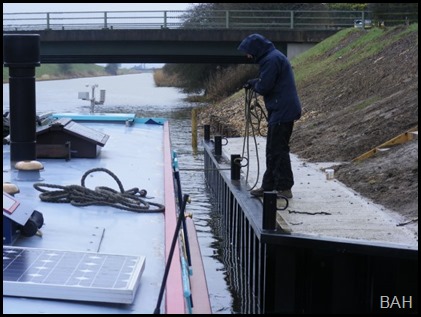 I don’t know how cruisers will fair with there rounder bilge, they may well be OK, it will depend on their total draft, we only draw about 22” at the bow.