We arrived at the boat about half twelve to bright sunny weather, all the wind turbines were laying idle and not a cloud in the bright blue sky.

I switched on the power and was pleased to see 28 volts on the domestic battery bank, the starter battery was a different matter, with insufficient power to bring the warning lamp on. Last time out I had to use the jump leads on the first day but while it has stood for a month its completely died. Good job I had brought its replacement with me.

I opened the main valve on the water system and started to refill the calorifier and pipe work, but before I had water coming from the hot tap the main storage tank was empty. So while I finished installing the new battery Diana filled the water tank. It wasn’t long before it was all systems go and about 2 pm. we set off towards March for the night.

We met 3 Narrowboats on the way, the second I thing was running on biofuel as it smelt like a chip shop as we passed.
The afternoon was very pleasant at about 7°C with a very light breeze that had bit of a chill, but the sun made up for it. 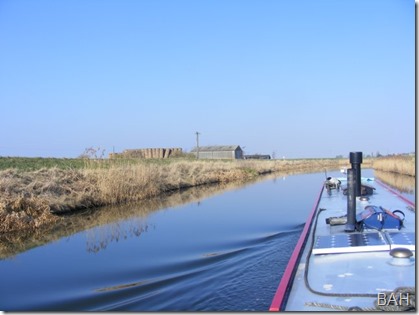 We called in at Fox Narrowboats where I made a right pigs ear of things coming alongside as I didn’t realise that the quay heading stuck out about 3ft further on the left of the slipway compared with the bit I could see on the right. The reason for stopping was that I had won one of their mugs in a competition they were running on Facebook. When I entered I didn’t even realise there was a prize.

As we reversed back out of their marina I had to wait for a cruiser to go passed, this is the most boats I have seen on the Middle Level for some time. We were going to moor on the park moorings but there were 3 fishermen well set up so we continued to the town Moorings where about quarter past three we moored in front of two other Narrowboats from Floods Ferry.

Work is coming on at the new Middle Level Watermans Club moorings just under the footbridge, I understand that they will be installing piling shortly. 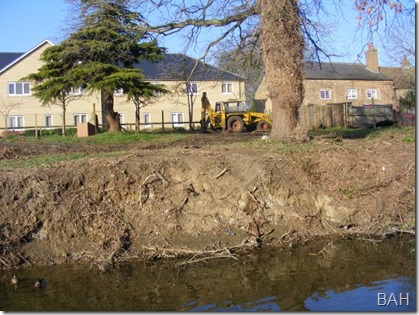