A bit of rain first thing but fine and sunny when we set off at 10am. One good thing about this canal is that the bridges are very conveniently spaced, so the crew can walk the towing path if they wish with lots of opportunities to pick them up. There are 66 of them in just 22 miles.

Out of interest does anyone know, without looking it up, the number of the first bridge that crosses the Ashby canal? No prizes, just a bit of fun.

It took us just over 2 hours to reach Marston Junction where we rejoined the Coventry canal turning left. It wasn’t long before we were at the wonderful Charity Dock where two chaps were cleaning the dry dock out. They will have bit of a problem using it as not only are there a row of cruisers moored in front of the entrance there is also a sunk Springer.

The number of manikins seem to increase every time we pass, they now seem to congregate at the south end of the site with just a couple of Jim’s hanging at the boat yard end.

We saw two coal boats on this section, one we met and the other was moored at the wharf by Hawkesbury Junction. The airgun range behind the lock cottage at Sutton Stop looks a lot more open than I remember. 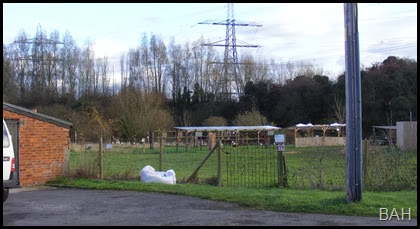 Just round the corner from the lock on the North Oxford canal there was a horse and foal grazing. The horse was tethered but the foal running free. I guess it wouldn’t go far without its mother. 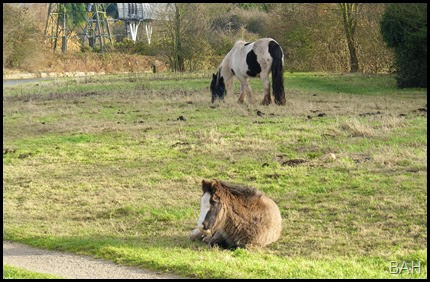 Some years ago British Waterways who were in charge of the canal system then, spent a lot of money removing a very poorly bridge, number 16 at Ansty, it was a handy bridge when it was open as it connected the visitor moorings with the Rose and Castle pub.
However the work they carried out to make the structure secure is not standing the test of time and already the offside abutment wall is cracking and splitting apart. 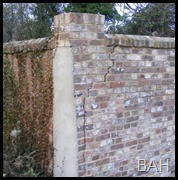 We were now going along side the West Coast rail line, somewhere we did not wish to stop for the  night, there is just one spot where the canal wiggles away just a little bit from the line and that is where we saw the Rose Narrowboat work boat moored, the flat carrying the branch chipper is painted in the same livery so I would think they own them both, both ex BW and now on hire back to CaRT probably. 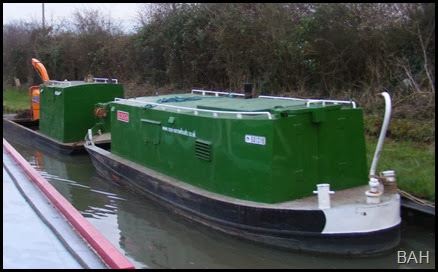 The motors name is Slough and you can see Rose Narrowboats name painted on the side. They are even moored up with rope.
There would have been room for us to have tucked in here but it was half three and we still had some daylight left so we carried on beside the railway and between the long rows of moored boats to Rose Narrowboats yard at Stretton Stop, here they had another work boat moored, this one being a more modern push tug with a hydraulic coupling system, so maybe they are diversifying. 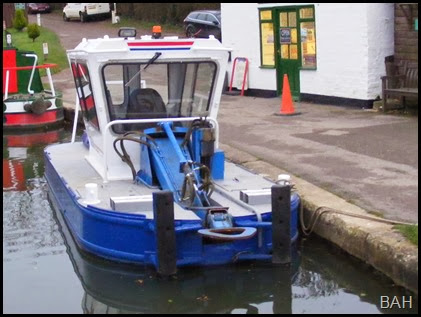 After Stretton stop the canal and railway part company and about a mile further on we tucked into the row of moored boats at All Oaks Wood for the night just on quarter past four and still surprisingly light.

I asked Ian and he thinks it's bridge 15

If I remember rightly there's an old gauging lock, now gateless, at the entrance to the Ashby. Perhaps there used to be a towpath bridge between here and the junction. I'll guess the current first bridge is number 2.

Brian
I thought that bridge belonged to Punch Taverns which is why it took so long before BW were able to make it safe, they had to wait for Punch to fund it.

Possible, but it looks they will need to fund it again soon. Its just a pity they didn't put a walkway over it for pedestrian access, still I suppose it would had to have been wheelchair friendly in this day and age.