Well as expected the wind got up last night and it rained somewhat. It didn’t start until gone 11pm and we just happened to be moored with the boat pointing right into the wind, so heard and felt very little. As it was still raining and blowing, although not so bad this morning we decided to stay put until it stopped. It stopped quite suddenly at about quarter to twelve and we didn’t get another drop, the sun even came out and the sky was blue for a time, as for the temperature well that went up all evening last night and today was around 10°C

Well before we were ready to go and it was still raining we had canoes going up and down the canal passed us, maybe they all take Seven Seas like they do on TV. We pushed off at ten to twelve and this flock of ducks came racing over to see if there was anything going, there is a real mixture of ducks in Cropredy. 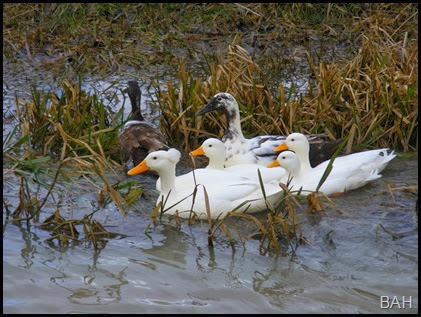 There was still a bit of wind but not enough to be a major problem, just a bit of crabbing at times, there had already been a boat through while we were moored so the locks were with us all the way to Banbury, a couple had leaked a bit but not to bad.

Work is still ongoing at Bourton Lock Cottage, looking at it, it is quite obvious that it has been greatly extended some time in the past. I wonder how long it will be before its completed. 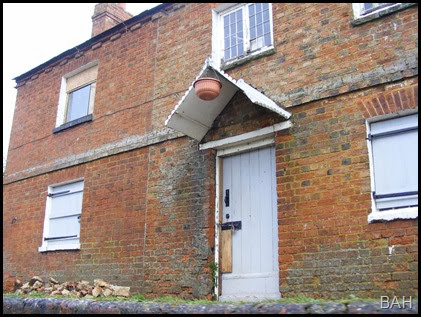 After dropping down through Hardwick lock and passing under the railway bridge we were surprised to see some trees with catkins on them already, have I missed winter, is it spring. 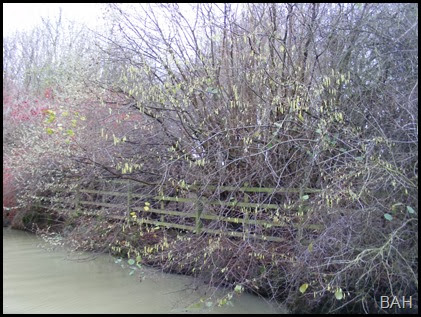 We moored up in Banbury, completely spoilt for choice, the only other boat moored on the 48hr moorings was leaving as we arrived. Our reason for stopping her was not to shop but for my daughter her husband and my little Grand daughter to visit and it wasn’t long before they were with us. We sent them packing a little before 3pm as we wanted to move on before dark. Arriving at the town lock the boat before us had left both the bottom paddles fully up, not that it made much difference, there was so much water above the lock it was flooding over the gates as usual.

We continued on for another half hour or so mooring for the night between the two lift bridges, last time we were here there was some construction work going on in the field on the off side, the safety fencing is still there but part of the site looks to be under about 3ft. of water at the moment.

We noticed the bottom paddles at Banbury Lock have been regularly left open. It might have been done by CRT as there is so much water to get rid of above.

You might struggle to get under Nell's bridge if you are going that far.

No notice from CaRT on the gates so I closed them, they want Marston Doles left up and put a notice to that effect.

Try to catch you an the way back.

After we came up the lock and moored I walked back to drawthe bottom paddle, by the time I arrived the level in the lock was already lower than the top pound due to the leaks through the bottom gate, so it really didnt make a lot of difference.