It unbelievable how quiet the mooring is in Coventry Basin considering how close to the city it is. The only down side is the amount of light all night. We had to cover the bulls eye in the cabin roof and I woke to a Blackbird singing its heart out at about 3am this morning.

The day has been quite overcast, no wind and chilly, the forecast was for rain but it has stayed dry all day. Before setting off at 1030 we had a wonder round the basin taking a few photographs. 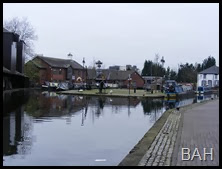 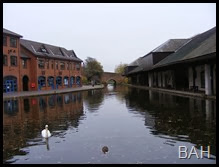 There are 6 Valley Cruisers moored in the south arm of the basin and they have an office at the very end of the arm. The part of the basin in the photo on the right above is all no mooring so the only visitor mooring is in the arm on the right of the left hand photo above. Mr. Brindley still stands on the fork overseeing things. 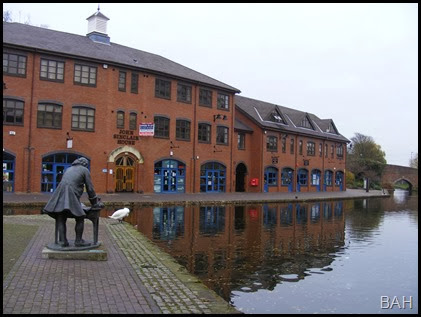 For some reason this swan took a fancy to my boot while I was taking photos and kept giving me nibbles. 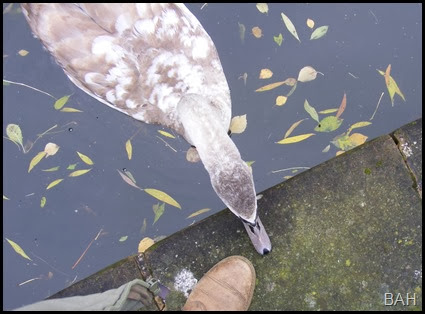 The entrance and exit to the basin is via a bridge with no towing path and very high parapet walls. This was to make the goods offloaded secure from theft and no boats were allowed in the basin overnight. 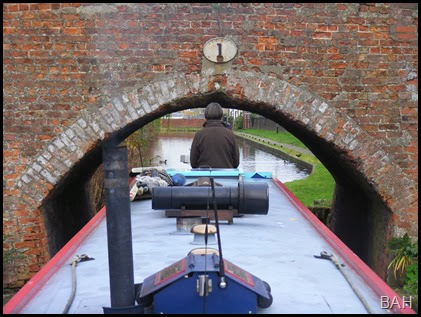 Just outside the basin there are 2 water points but it looks as if CaRT have just replaced one and used the old cast iron design as opposed to the modern stainless steel ones. 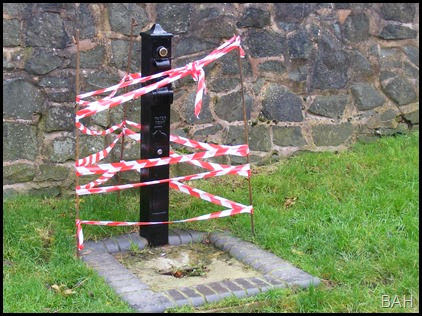 About a mile outside the basin there are some houses on the north side of the canal, the top floor of these use to be weavers workshops and are known as Cash’s Hundred Houses, as you 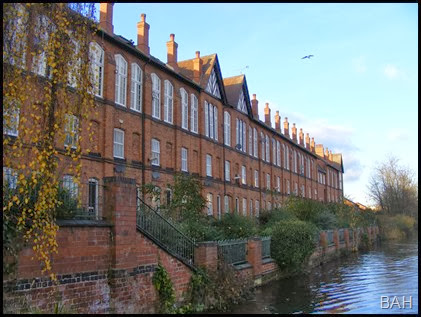 can see the upper floor has twice as many windows as the other floors to let the light in so the workers could see what they were producing on their looms. The council have tried hard to brighten the area around the canal up with statues of old cars and tools used to build the canal. 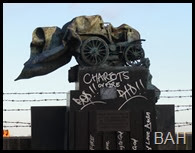 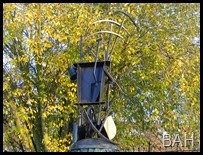 They have also installed brightly painter iron railings and other features to the canal side.

It may be hard to believe but this boat is moored on an official 7 day mooring, on a bend just through a bridge.

At 1300hrs we were back at Hawkesbury Junction, exactly where we were 24 hours earlier but going in the opposite direction. We had the journey down to the terminus and back, so ten miles without a single visit to the weed hatch at an average speed of 2.5 MPH

We carried on east along the Coventry canal past the famous Charity Dock with its collection of not only boats, what looks like general scrap  and the most manikins I have seen outside a department store. We met one boat along here, our first today. At Marston Junction we made a very tight right hand turn, probably 110° down the Ashby Canal, we spent a bit of time under bridge 1 chatting with Maffi who was moored a bit further along the main line. Travelling down the Ashby we met our second boat of the day who we recognised from our time on The Great Ouse. We carried on for about 4 miles and moored in the middle of nowhere a short way beyond bridge 12.