Last night the temperature dropped to below -5 so when we got up this morning the canal was covered in ice but by the time we set off at 10 am it was quite a bit warmer, only -3 in bright sunshine. The ice around the boat was about 6 mm and  a bit further along it doubled to 12 mm, whereas in some places it was barely a skin on the surface. We broke Ice for an hour, the only spot giving any problem was the bend at Stoke Golding with boats moored all the way round it, travelling slowly passed the moored boats I just didn't have the momentum to swing the back  out and get round the bend, having to back up and take a second bite at it on a different angle, some of the looks we received from a few of the occupants as we passed said 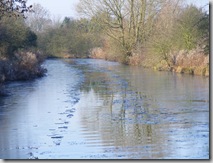 we should not be boating in such weather but others gave us a hearty wave.
Just beyond Higham Bridge some good Samaritan had been moored the night before, left before we arrived and had cut a nice clean channel all the way to the Coventry Canal at Marston Junction, this made the majority of our days travel much easier. thank you John.

At the junction someone has placed a posy of silk flowers in the piling, I don't know what dreadful deed has happened at this spot in the past that someone has marked it with flowers.
Once on the Coventry canal we turned hard left  still following the broken ice, a short way passed the now decaying Navigation Public  House we pulled over and had an enjoyable cup of tea and 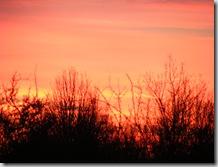 chat with Terry and Chris, before we knew where we were it was 4 pm. so we said our goodbyes and headed off to Hawkesbury where we moored for the night a little short of the visitor moorings under a bright red sunset.
Apart from being cold out of the sun today the weather has been absolutely stunning with bright sunshine and blue sky's, I expect we will pay for it tonight with very low temperatures again.

All that ice makes you feel a bit vulnerable. Lets hope it stays thin all the way back to Napton.

Brrr! We're a lot warmer here, not in the minuses anyway.