Last night the noise from the passing trains was quite intrusive  which was strange considering how far the railway line is. Over night 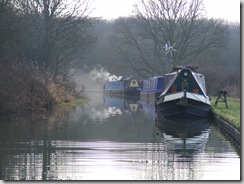 the temperature dropped into the minus figures once more.
This morning was still and sunny, I started the engine at 10 ready to push off but the boat a short way behind had the same idea and as I came up the hatch he was dropping his ropes off, it seems that 10 am is a popular start time and I think I will try to change ours when moored amongst other boats, anyway I gave him 15 minutes and set off, It wasn't long before the wind freshened slightly and it turned quite cool but stayed dry.
Approaching Ansty there were 4 BW chaps with 2 ropes and grappling hooks, I saw one of them returning to his van and enquired what they were after. It seems that a dog fell through the ice during the recent cold spell and the owner wants the body retrieved, needles and haystacks come to mind. We met Bill on Rosy tied up in Ansty doing an oil change so had a few words before pushing on, If anyone is interested in narrowboating on the continent they should read his web pages at http://www.billybubbles.demon.co.uk/ . One thing I noticed was that all the long term moorings opposite The Rose and Castle were vacant, I wonder if this is because BW can't let them or they are not trying to.
Loads of vacant visitor moorings at Hawkesbury Junction, just as we were leaving the lock a boat arrived from the Coventry Canal to lock up onto the Oxford and I have to admit that I failed to make the turn onto the Coventry canal in one ending up close in by the new houses just before the old pump house.
We carried on along the Coventry Canal until we reached Marston Junction. Between bridge 15 and the junction there was an interesting little aluminium cruiser owned by BW which is used for hydrographic surveys, once past it we turned very sharp right 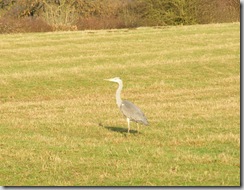 into the Ashby canal, by now the weather was quite pleasant so we carried on for about 2 1/2 miles where we found some convenient Trench Sheet piling to moor to, the time was a few minutes past three.