Last night the temperature dropped to almost -6 but when we got up this morning it was just above freezing point and the ice was melting.
10 AM and we made a move down to the water point, the pressure was very poor but we needed water badly so persevered, I walked down to the refuse disposal point at the junction, BW have recycling bins here as well as general refuse but people have just dumped their general rubbish in the bottle recycling bins so they are not proving very successful. When I returned to the boat the water flow had improved greatly so I can only assume the stand pipe had ice in it. It was just on 11 am when we left and made our way past Hawkesbury Junction straight on toward Coventry City Centre.
My memories of this stretch of canal are crystal clear water with the fish flashing about under the boat, being able to see all the weed that grew so well in the clear water and all the rubbish laying on the bottom. Now the water is as murky as the rest of the system and has obviously stifled the plant growth, the rubbish is still there but you just cant see it. There was still a covering of ice in some places but no particular thickness. 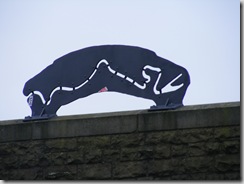 On several of the bridges there is a silhouetted map of the canal mounted high on the parapet wall made of quite thick steel, anything less would have succumbed to some of the lowlife that seam bent on destroying all in their path. We passed the old Club Line hire base at Swan Lane Wharf which is now a "not for profit" project. Entering the basin there was only one boat moored there which is good because the swing bridge is closed preventing access to the end of one are, its "No Mooring" along the front of the shops and services and the other arm has room for about 3 boats against the island and one the other side. The canoe club are out in force and we are getting constantly rammed as we are opposite their base, I don't mind if its the canoes hitting the black but I wont be amused if I find paddle scratches on the gloss.
A majority of the shops and offices around the basin are now displaying large "For Sale" or "To Let" signs and only the hairdressers and one shop are open.