It was reasonably bright first thing this morning, but by 10 am when we were ready to set off it was very fine drizzle, over the course of the morning this got worse and by the time we left Hillmorton locks it was raining. BW were hard at work in the bottom lock, there biggest problem seemed to be pumping the chamber dry and sealing the top gates by throwing hand fulls of ash or dust in to close the gaps, the bottom gates are still missing and they had two pumps running in the lock.

The tree by the long term moorings in the top pound now displays a lovely growth of fungi on its trunk.
The moored boat that was above the first lock has now gone as has the shared ownership one from the top lock, I think it was the same one that we saw outside The Boathouse at Braunston when we arrived, they have since left and we may move over into their spot..
Refurbishment work has started at The Royal Oak, Hillmorton with the painters hard at work painting the window frames on the outside and in the rain!

There was no sign of activity or progress at the 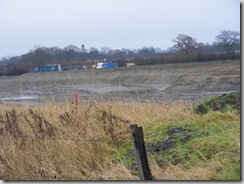 new Barby Marina, but this could just be due to them waiting for the land to settle, but there is still a lot of work to do before it becomes a working marina open to boat. There is still the entrance to cut and the pontoons to build, let alone filling with water and leak testing, I don't know their latest proposed finish date but I would guess its still several months away.We met several boats on the move between here and Braunston. At Braunston Turn we branched to the left and carried on into the village, turning in the marina entrance.
The elsan disposal facilities and water point have now reopened with a brand new cast iron water point to replace the taps that were screwed to the wall, I would imagine this is to discourage people using the water point to flush their elsan equipment after use and improve hygiene as they would have to unlock the stand to use it. 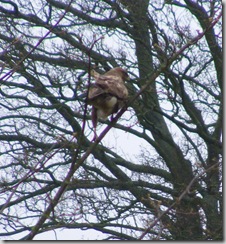 As we passed the waterpoint a Buzzard landed in the bush next to the canal in the grounds of Braunston Manor Hotel. I have never seen one so close to the village before. We carried on under the A5 bridge and have moored opposite The Boat House, as we are planning to eat in there this evening I may just slip across and moor right outside the door.