Today we not only dumped the rubbish at the Hawkesbury Junction recycling point, the news paper/cans had not been filled with general rubbish but I also removed the stuff that had been picked up yesterday coming back from Coventry. The "stuff consisted of about a meter of bright red 6 mm polly rope which was well wound round the prop shaft intermixed wit carrier bags and some heavier polly material.
We set off at 11 am with a few boats on the move, what did surprise me was last nights temperature, it fell to 0.4 c some time overnight which was quite low when you consider it was still about 5 c when we went to bed.
There is a notice on bridge 9 saying it is half a mile to The Elephant and Castle pub that now does food, I would estimate it to be a least a mile by canal. 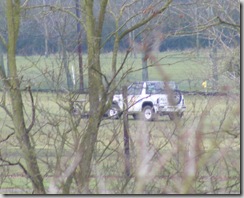 We passed the golf course that is situated both sides of the canal, on the right hand side they have a "driving range" and use a small 4X4 pushing a contraption that gathers all the balls.
As we passed Rose Narrowboats The air ambulance flew over us and then as I we approached  All Oaks Wood I heard a police car with blues and twos, I finally spotted him doing all of 30 mph and crossing the canal by Rose Narrowboats heading north.
We stopped at Lime Tree marina  and just across the canal from them was the Air Ambulance and police cars. We pulled into the marina to fill up with diesel at 77 p lt. Speaking to the owner he is installing a boat lift this season so that he will be able to lift boats from the water to the hard for blacking, repairs etc. Just as we finished taking almost 150 lt of none bio, low sulphur diesel the air ambulance took off and headed off which just left the flashing light of the emergency services and the vehicle recovery trucks. 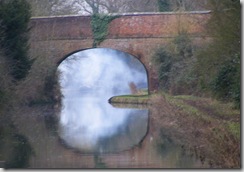 As we approached Terry Yates's yard we thought he was firing up a steam boat, but it turned out to be a bonfire at the bottom of the garden which obliterated the canal with smoke. We stopped at Newbold outside the pubs, they are now both open and The Boat doing food, to fill with water, Di tested the tap and it was just a trickle, but the other had a very good flow, once full we carried on through the bridge and moored at 3.30 pm on the almost empty visitor moorings.

The "stuff consisted of about a meter of bright red 6 mm polly rope which was well wound round the prop shaft intermixed wit carrier bags and some heavier polly material.
I guess we have all this to look forward to. Sounds lovely. :)

I didn't think that toobad for 10 miles of urban canal, I didn't get anything on going down and I was getting a move on comming back to get to the Oxford Canal in day light.