Well what a day, 25°C+ wall to wall sunshine from first thing this morning, will we pay the price towards the end of the week?

About 9-30 our Scouting neighbours set off. The river appeared to have no flow at times, but by dropping off their bow rope they very slowly came round and pointed back downstream. 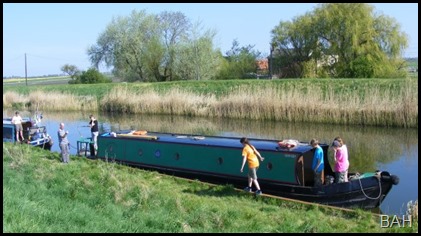 The boat is called the Harboro’adventurer II and the bottom of the hull below the rubbing strake dates from the 1930s and is riveted the rest has been added since and last year she had a new engine.

Once they had left we set off upstream, but before I left I took another photo from the same spot as last night. I think last nights was the better shot. 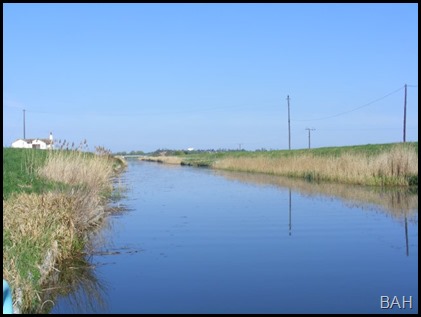 There was even more of the brown scummy lumps floating on the water, it looks disgusting but I am sure its harmless plant matter. 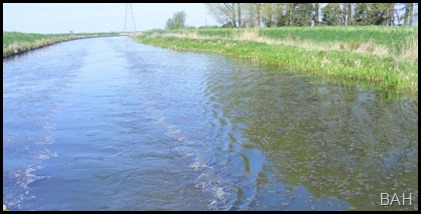 We were hoping to fill with water at Prickwillow but there were two Narrowboats on the moorings so we would have had to laid outside them to have taken water so we will do it tomorrow. Rounding the corner there were four cruisers where we had been a couple of nights ago.
We continued on towards Isleham Lock, The river between the lock and the Gt Ouse looks as if its had a lot of human intervention over the years as its just a series of long straights connected by half a dozen bends. But when someone said that 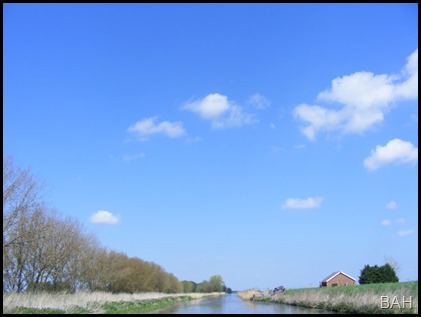 East Anglia was the land of never ending sky they were not far wrong.

On the right bank I spotted a small bunch of flowers with a small wooden stake in the shape of a fish. Did a fisherman die here or 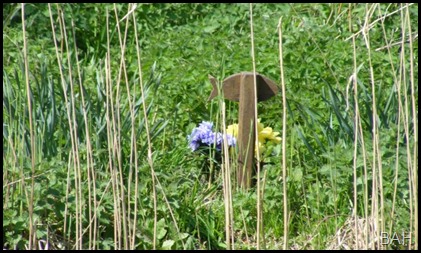 has someone got their ashes buried at their favourite fishing spot, who knows, but someone looks after it.

As the lock came into view there is a large flash on the right hand flood plain, today it was home to a herd of cows who decided that a paddle was the order of the day.

We had to wait for the lock as a wide beam was just coming down. 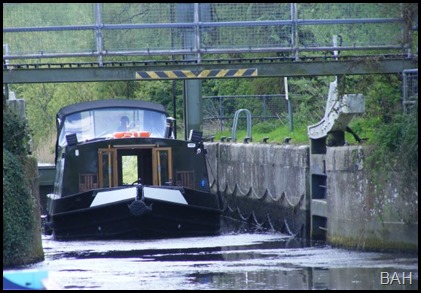 This lock is fully mechanised with V gates at the bottom and a Guillotine at the top, all hydraulically powered.
We now come to the best part of this river as we continued to our mooring for the night at Judes Ferry. For those that are new to reading my blog I will just point out this memorial stone on the bank to the Rev Spurgeon, as you will see its almost the 163rd anniversary to the day. 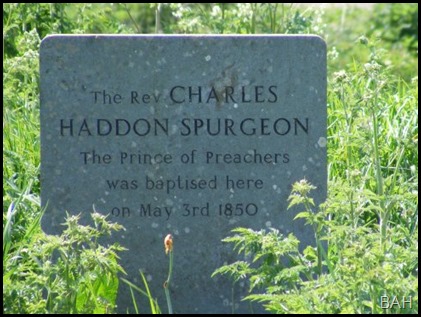 When we arrived at Judes Ferry there was already one Narrowboat there so we just went passed them and pulled in. This is not the easiest spot to moor as deck of the landing stage protrudes about 500mm over the piling, just making it right to rub a line along the cabin sides. Our method of dealing with this is to use two poles pushed into the mud between the boat and the edge of the landing stage.
We had not been here long when a cruiser came along and moored ahead of us, filling the landing stage.

We walked upstream to the old staunch at worlington, to get to it you have to walk through someone's front garden as the footpath runs between their house and the river, they have a gate at each side of the lawn and right in front of the house is a footbridge across the staunch. There are only a couple of shallow points that would stop you getting a boat up here, but you would be hard pushed to turn anything over 20 foot long.
On our return there were two more cruisers moored up, but they had to moor under the road bridge.