Last night we had a great pie in the lazy Otter last night. It was made in a dish with a pastry bottom as well as top, not a lump of flaky on top of a spoon of meat and gravy that you normally get.

The wind touched 40 MPH last night and wasn’t much better today. We set of at 10 am. with a bit of a struggle getting off a Lee bank, in the process I managed to snap the radio areal on the back cabin.

water we were shielded by the banks. As  we passed the new moorings at Stretham they were digging the road up ready to connect the water and electricity supplies.

At the Fish and Duck there are also busy installing electricity and water points along the bank of the Old West river. 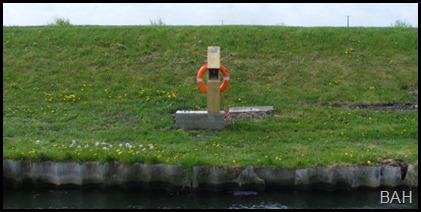 Passing through Ely we passed an unusual Narrowboat that we had seen navigating up the river last week. The top box and cratch are so high that the steerer can’t see straight ahead of him and has to look down the side of the boat.

Once through Ely the wind was behind up which made things quite pleasant at times. We stopped for a short time at Little Port where I removed the stub of the aerial and fitted a stainless steel bolt in the hole in the roof, I was concerned to get this done before the rain caught up.

Arriving at the Little Ouse I felt it best to go up the river forwards unlike last time when I did it in reverse. We stop just through the A10 road bridge to load/unload the boat as it by the carpark. just as we pulled in the wind picked up, there were half a dozen spots of rain and a dust cloud came over. I was OK as the stern was under the bridge. 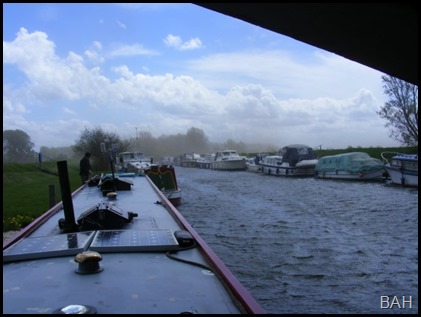 We had taken just on 4 hours to get from The Lazy Otter back to our home moorings. Once the stuff was moved from the boat to the car we moved up the river another couple of hundred yards to our mooring.