This morning we were up early to drive to Bicester as it was my youngest Grand daughters naming ceremony, a civil version of a christening. The was carried out The Garth, Bicester. We followed this by a trip to the pub at Bure Park for a swift one followed by a hog roast in the grounds of the local primary school.

We arrived back at the boat a little after 5-30 PM and by 6 PM we were on our way down Brandon Creek turning left at the Gt. Ouse. We were hoping to moor at Little Port but the moorings were all taken, 3 of the Narrowboats there were also there 3 days ago when we passed as well as yesterday.

We turned up the Lark hoping to get in at the EA moorings at Tom Holes Farm but there were already two boats there, so we joined three other boats on the opposite side moored against a length of piling. By now it was 7-30 but still quite light, the only other option would have been to carry on to Prickwillow but I expect that would also have been full, hence the three boats here.

At about 8 o’clock a Narrowboat came chugging up the river looking for somewhere to moor, so we pulled back a few feet to make room for them on the piling. It was the 3rd Thetford Scout group boat that has a mooring at the top of the Wissey, we often see them about with different bunches of kids onboard, the boaters of tomorrow. Today it was 9 youngsters from the Colchester Area. 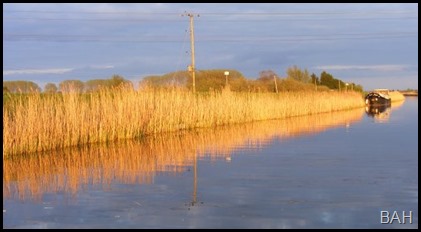 and looking the other way into the sun gave some nice cloud and water effects. 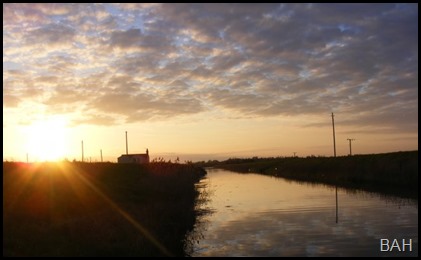 I even had a duck and a swan pose for me. 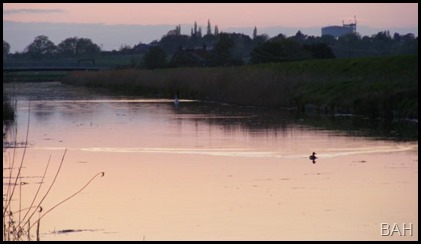