We set off dead on 10 o'clock in light drizzle and sure enough Peter was waiting at the bottom of his garden to say hello, by the time we said goodbye to him the drizzle had stopped and the sky was turning blue, the weather continued to improve as the dat went by and we are now moored in bright sun shine. We would meet a few boats on our way into Birmingham.
One of the boats on the long term moorings at Lyonn's boat yard had a good selection of bird feeders and plants on the side of their boat. 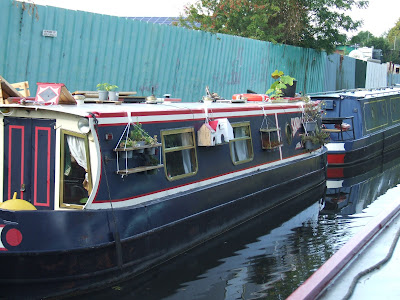 We came upon another length of closed towpath, this time the wall hadn't fallen down but the path was closed in case it does, they have demolished virtually all the internals already. 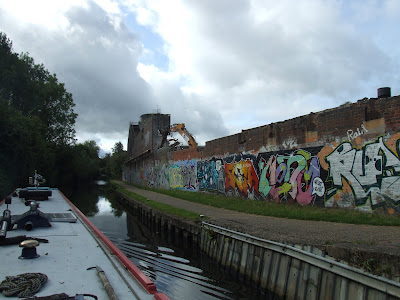 At lock number one, a guillotine stop lock built to protect the water supply of Birmingham which also has a brick bridge over the lock chamber a couple were hard at work pressure washing off the graffiti, they stopped as we approached as they were working under the bridge arch. 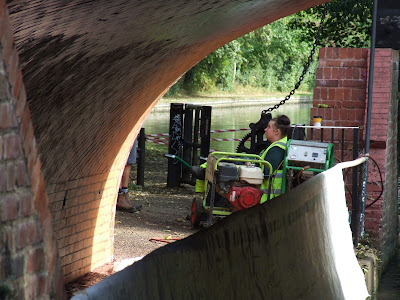 From here it is only a short way to Kings Norton Junction where we turned right on the Worcester and Birmingham canal for the run into Birmingham.
For some reason  people seem to enjoy having skeletons set up in their gardens by the canal, this one even has his wee dog with him. 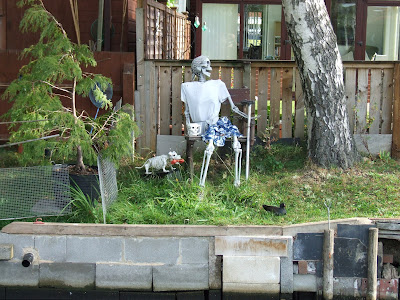 The Birmingham University have had an experimental hydrogen powered boat for some years, I have never known it to move and last time we passed it had brambles growing all over it, well today it had moved a bit, it was looking poorly with the deck boards up and connected to a petrol generator. 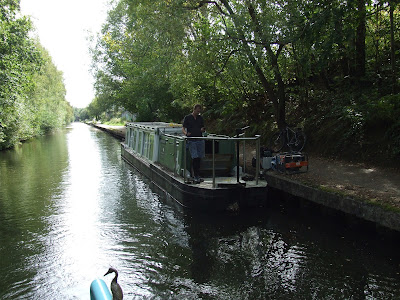 The last time we came this way I almost got cough by a canal stoppage where the canal was only open a couple of times for an hour while they lifted large concrete pillars over the canal to erect by the railway, this is what it looks like today, still a lot of work to do. 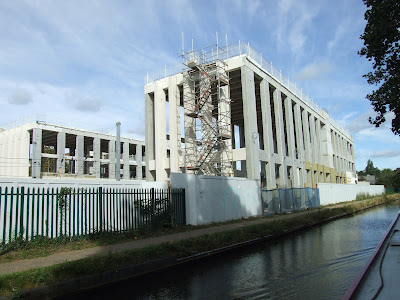 Just before we reached the Mail Box we met the trip boat, thankfully he sounded his horn before I saw him so we could just wave to each other as we passed, there were no boats at all moored by the Mail Box and very few in Gas street, we headed for our favorite spot behind the Sea Life Centre where we found Graham and Brenda all ready moored up with just one other boat so plenty of room for us. 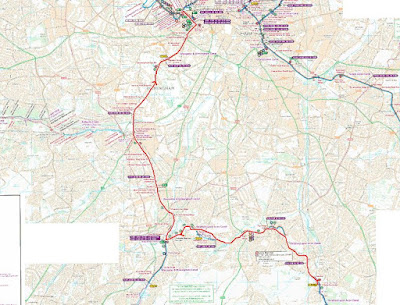