We had a little think last night as to what we should do today and decided we would turn round again and head south on the Grand Union canal.
We woke to a lovely sunny morning with clear blue sky's and at 9-30am dropped back to the winding hole and headed for the Ashted flight which needless to say were all against us. The first lock takes you straight into Ashted tunnel hoping that no one has entered from the other end while you have been locking down. I don't quite know why this tunnel was ever built as there appears to be no high ground above it. 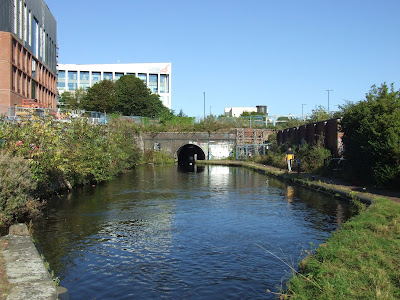 Since w were last this way the University building work has been going on at a pace and has now tied in the old building façade and water tower. 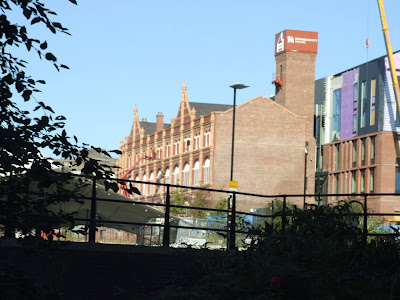 When we reached thee last lock of the flight we mat a boat coming towards us, so that was just one we didn't have to turn. The bottom lock takes you straight into Curzon Tunnel, this is a very wide but curved tunnel under the railway and looks quite modern and was probably built to accommodate the railway crossing the canal . 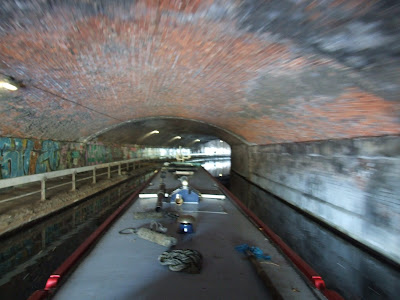 As you drop down the last lock to enter the tunnel which as you can see from above has a towing path the canal company mounted rollers at the exit of the lock, under the mouth of the tunnel to prevent the towing lines rubbing on the tunnel roof as the horses pulled the boats into the lock traveling up hill. 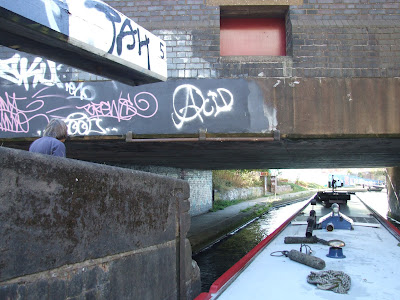 We carried on to Digbeth Junction and turned hard left through the stop lock at Warwick Bar. 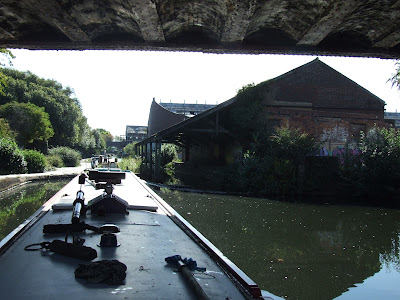 Shortly after this we passed   the old   Warehouse which looks as if its being renovated, I wonder what it will be in its new life? 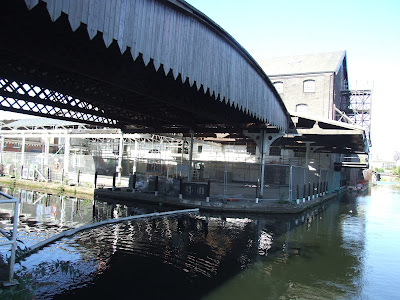 I wonder how many developers today would go to the trouble of including something like this in their brickwork, I bet HS2 wont, it will be plain brick at the best or even bare concrete. 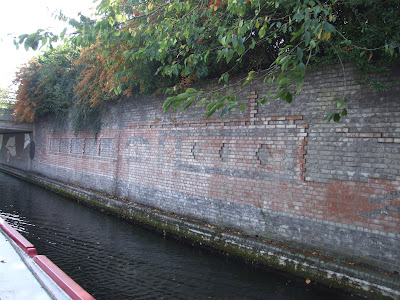 We pushed on to  Bordesley Junction where a boat was conveniently moored on the lock moorings where I wanted to drop Diana off, so its not just London where it happens. This time we were going straight the Camp Hill flight ahead on the Grand Union Canal, on the second from top lock I nearly had a mishap climbing the lock ladder, the ladder was OK but the two handrails at the top were not secured and the whole lot tipped back as I went to climb onto the lock side, but I survived. We were now on a broad canal, I mentioned the other day CRT are having problems with walls adjacent to towpaths, well here is another that has fallen over. 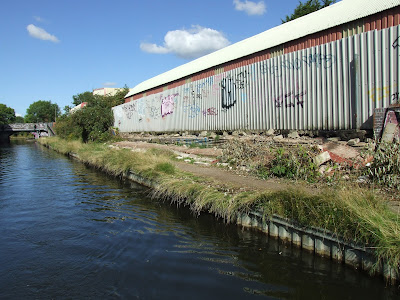 This has me puzzled, its a brick pillar on the off side of the canal just to the south side of bridge 89 and it looks to have a set of hinges set into it. If anyone can shed any light it would be greatly appreciated. 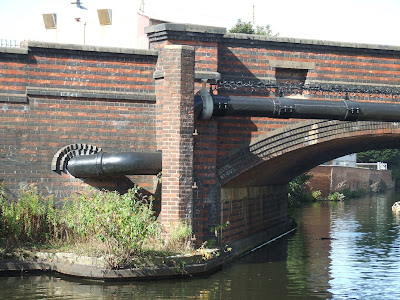 As we made our way along this broad lock free section a group of walkers with banners were coming along the tow path towards us, the are on a pilgrimage for justice for the Climate, They are walking to Glasgow.  . 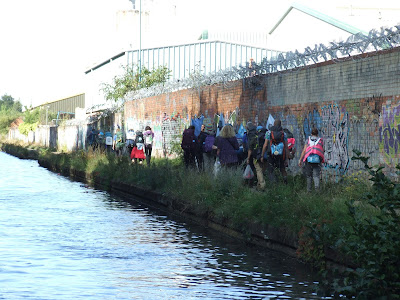 Another first, these electrically driven paddle wheels along with a raft mounted generator, I can only assume they are oxygenating the water, possibly because they were dredging a bit further along.
There was actually a second unit up by the bridge.
The dredger was mounted on two floats to make it wide beam and he had two tugs with him taking the spoil away 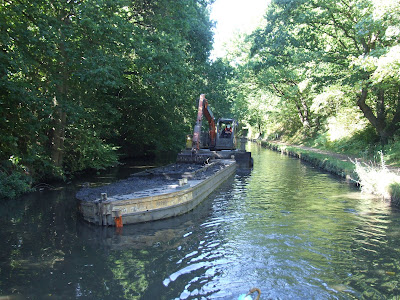 I thought that maybe they were using the spoil to back fill along the long length of piling they have carried out along this section but no, 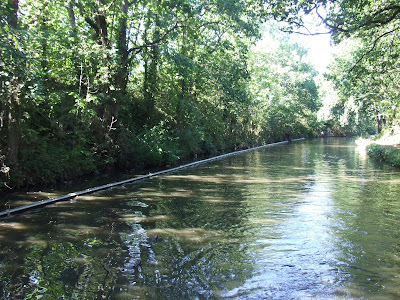 they were taking it to the CRT Cope Heath Yard probably a good 2 miles away. so both operatives were getting plenty of leisure time waiting for the full and empty pans to arrive.
Our target for the night was Catherin de Barnes but when we arrived dinner was still cooking in the slow cooker, so we carried on to moor about a mile before Knowle Locks. 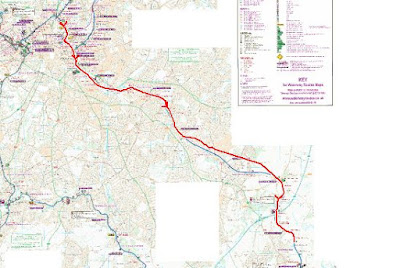