We left the mooring about 11 am and made our way through the lift bridge to the water point and topped the tank up. Just as we started taking water a boat came down the cut heading south and when he got to the right angle bend just before the bridge crashed straight into the concrete bank, The steerer was heard to shout to his wife who was telling him to stop, that he couldn't see which way he was supposed to go.I would have thought it better to have stopped under the circumstances than just carry on straight into the bank.

While we were filling with water Maffi came onboard for a coffee and a look round, well the tap was a bit slow. Just as we were about to leave another boat came through the bridge and then dropped the bridge right in front of the boat that was following him causing him to do an emergency stop. Putting his boat hard into reverse sucked a car tyre off the bottom of the canal and wound it round his prop, so he was not best pleased, but he did appreciate it when we invited him to join us in Shipton weir lock even if it did mean he had a longer wait at Bakers lock.

When we came through Bakers Lock on Friday I noticed that the bottom paddle gear was faulty, as it was still the same this afternoon I rang BW to inform them of the problem.
Between Bakers and Pigeons Lock the pound was down by a good 6" which made life interesting when meeting a boat or getting slightly off the line.

As we approached Northbrook Lock a boat that had been moored just before the lock moorings for lunch  rapidly packed everything away and set off in front of us, this was with a boat just entering the lock to come down. When the left the lock they left the top gates open, like wise at Dashwood Lock. We passed them at the water point at Lower Heyford where they were filling up and we haven't seen them since.
At 4 PM. we moored for the night in Lower Heyford a short way before the aluminium lift bridge, 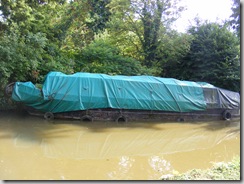 opposite a boat that is fully covered over and has not moved for as long as I can remember, there is no sign of a name, number of license, but of course that doesn't mean there isn't one.