The moorings last night were very quiet after about 11 pm.
We set off this morning in bright sunshine at 9 30 am. Down through one lock and on to Diglis Basin. There are a lot more visitor moorings here now than the last time we came this way. Just as we entered the basin I could see someone at the large lock at the far end, but I don't think they saw us. I tied up to the lock landing and they were still going down, so I helped them out of the bottom gate expecting them to wait for me in the pound between this lock and the river lock. One of their crew went forward to set the river lock while I turned the top lock, they couldn't even wait for us to drop down, instead they went into the bottom lock and dropped down onto the river alone, leaving me to turn that one as well and these are big barge locks not just wide canal locks with very heavy gates. Never mind nb Jude I am sure we will meet again. Because of the weight of the gates on these locks Diana took Harnser out onto the river while I closed up, the only access to board a boat on the river is a pontoon just down stream of the lock, so after picking me up we had to turn round to head to Stourport.
It was a cracking day on the river with very little flow which was surprising as the river had been closed due to high flows on Friday.
I saw 5 Kingfishers as we passed through the wooded sections of the river, I think they have faired better on the rivers than the canals in the big freeze last winter.
At the mouth of the Droitwich Barge canal BW are carrying out piling work in readiness for the reopening of the  canal.
We had to wait at each lock for boats coming down stream, but 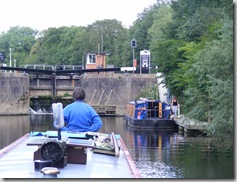 there is a landing stage above and below each lock if you need it, I was able just to proceed very slowly until the lock was ready,  this turned out to be a good thing as there was a boat moored on the landing below Lincomb Lock, not only that but they had left a fishing rod sticking out over the side.

At Stourport a boat came out of the locks leading to Stourport Basin just before we arrived so the lock was in our favour. I entered the first lock but the second was a bit low but we still had enough water to get over the cill without topping it up. At the second pair of locks the bottom was ready for us but the second of the staircase was empty so we had to top it up before proceeding. Andrew and Sheila were at the lock waiting for us and helped us through before climbing onboard for a ride through the top basin. At the exit to the basin there were 2 pirates working the lock for boaters collecting for charity.
We stopped above the lock for a bit having a glass of wine and chatting to A&S, after leaving them and making our way up the Staffs and Worcester canal we met 6 boats before the next lock and another 2 before Kidderminster where we have moored for the night right outside Tesco's so we will be able to top up with beer in the morning without the need to carry it miles.

Our river trip today took us just over 4 hours, much less than we expected due to the very water flow.