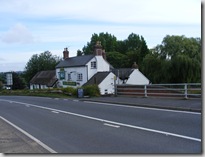 Last night we ate in The Anchor and I would be quite happy to recommend for both eating and drinking. We both had meals from the special board, I had Faggots and mash while Diana had Trawlerman's Pie which was quite large and fresh vegetables. They also had 4 Everard's bitters and a guest bitter on, ranging in price from £2.60 to £3.20 a pint.
Again it was a very fine night with a good moon, but thankfully a bit warmer than the night before.

This morning we again woke to sunshine but at about 8 am. work started at the quarry/yard opposite. We were on the move by 9 am. and met about 5 boats before the BW yard at Hartshill. I guess they must have decided to set off at 9 am. as well. We arrived at the top of the Atherstone Flight at 10 am. to find we were third in the queue. It looks as if there may now be a new lock keeper on the flight, or maybe not one at all. All the notices giving days to Christmas, weather forecast etc have gone as have the legs sticking out of the fake well. The locks all seemed in good order with everything well oiled/greased. We had quite a slow run down meeting several boats coming up and it took us 3 hours to complete the flight.
We pulled over to the off side to fill with water at the bottom of the flight, this also allowed the boat we were following to pull away.

There were a nice row of working boats moored outside the  Samuel Barlow pub at Alvecote and lots of room now that Canaltime have departed for pastures new.

The good weather stayed with us until about 2 pm. when the rain started and continued for the rest of the day sometimes quite light but others quite heavy. We stopped at Tamworth to visit the Tesco Convenience store to buy some bottled beer, never again, we had to use the DIY checkout even though there was some one behind the other tills, the adjoining DIY till continuously called for an assistant and when we had completed out purchase we still had to wait for an assistant to come over and accept out purchase as we had bought restricted items. I will never use one of these machines again. No assistant operated till, no sale. We caught up with a boat at Glascote top lock so had to turn it but by the time they left the bottom lock there was a boat coming up so we were able to leave the gate open when we left the first lock and wait some time for the approaching boat to negotiate the bottom lock. We carried on to Fazeley Junction where we turned left onto the Birmingham and Fazeley Canal and moored at 5 pm.about 200 yards from the junction.