Last night we wandered into town to eat and ended up in an Italian restaurant that we have used before near the top of the town called San Carlo, its quite a large establishment so its usually possible to get a table without booking during the week. 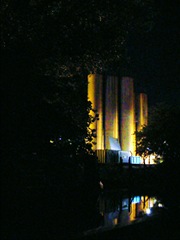 We returned to the boat and wondered about moving because of  the noise from the factory opposite, but as it was 10 pm and getting  dark we decided to stay put. Once we were in bed the noise wasn't to bad and we heard little noise from the lorries until early morning. In addition to this Magic was back to his old self and didn't cause any problem.

Sovereign had a delivery of diesel this morning at 9 30 so we reversed across the cut and filled up at 70 p/lt and even got 4 bantam eggs thrown in on the deal.  It was probably 10-30 AM but the time we left and when we arrived at Hardwick Lock we were forth in the queue. Bourton was a bit better with only one boat ahead of us, we had been going at slightly over tickover.
Things were about to take a dive and the queue at 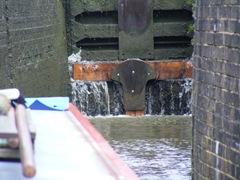 Slat Mill Lock was a bit more impressive. The wait was an hour and a half. The reason for this was that BW had been working at the lock to fit a new Babbie. Not only did we have to wait but as I moved the boat along using the centre rope I didn't notice a wasp sitting on the rope and drew it into my hand resulting in a sting to the base of my left thumb.

Cropredy has even more boats moored waiting for the festival, I don't know if BW have turned a blind eye but some of the boats on the 24 hr moorings were there when we went down. We made the very slow passage passed all the moored boats to Cropredy Lock where there was only one hire boat sitting waiting to go up, The only problem was they were just sitting, no one had gone up to the lock which was vacant but full,so Diana drew the paddles which got them into action. At Varney's Lock the traffic ahead vanished, we arrived just as the boat ahead was leaving which just left us to turn it and go in, the same happened at Elkington Lock and we moored for the night at 1630 just below Claydon Bottom Lock. There have been a few hire boats go by while we have been here, one of them a Rose boat that has to be back at  Stretton on Fosse first thing Saturday morning. Just after they had gone there was a bang and a boat that eventually moored ahead of us rattled down our site, I don't know why because the canal is wide,there was nothing coming the other way and the gap he was trying to get into was about 150 long.

I was hoping you might stil be here so we could go for beer! I did think you would have moved on! See you again soon.

Hi, this is Barry from nbAdagio. I like the Blog but would like to know how you installed the map gadget. Any tips?