We were ready to set off just after 10 am this morning, the wind had died away to nothing and there was not a ripple on the canal. Just as Diana was going out of the front doors the boat moored ahead of us pulled away so I gave him bit of a start before we set off also heading towards Braunston.

There is now a second boat sunk at Braunston about 100 yards south of the one that has been there for well over a year now. 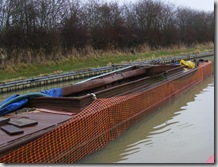 I am surprised they are having so much problem lifting the one that has been there for so long as her gunwales are above the water, she must have some  seriously large holes under the water. BW have a large pump on a flat at Napton that they used to empty the Napton locks, I am surprised they don't bring that down and try to pump her out as that would move large amounts 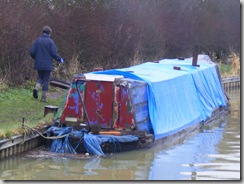 of water and may be able to overcome the inrush. The second sunk boat, also a wooden motor but with a full length cabin is close to the bank and sitting much higher in the water so should not be such a problem to get back up.
At Braunston Turn we carried on round to the left north along the Oxford Canal. Just beyond the first bridge we stopped for a chat with Mike on Draco, by now it was quite overcast and spitting with rain. There was still no sign of any activity at the new Barby Marina and still a lot of work to do before it will be open for business. We pulled over at Hillmorton opposite The Royal Oak to post a couple of CIBC membership cards as there is a post box just at the top of the steps, just the other side of the bridge we met Trevor on NB. Wyrd, he was about to set off and followed us to the locks where we back set for him.
Why do we always find boats moored on the lock moorings at Hillmorton, today there was a shared ownership on the lock moorings below lock 4, I wonder if the owners know its moored there when they are probably paying for a berth and then a private boat moored above lock 2 making it impossible for a single hander coming up to close up behind them. and if going down gives them a long walk to set it.
By now the rain had stopped but it had turned quite a bit cooler so we though we would stop at Newbold but by then the sun was out and it was quite pleasant so we continued on just passed All Oaks Wood where we moored for the night at about 4 PM. Just 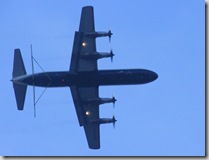 before we moored we had a 4 engined plane fly over us with a boom arrangement looking like a crop spraying boom under its fuselage, I managed to get this photograph of it.

Would that make it a sonic boom?