last night dinner was taken in The Wharf Inn with Brenda and Graham, I must say my chilli beef was quite good with a fair bite to it.

Overnight we had some heavy rain but this morning when we got up the sun was shining. The forecast was rubbish with the barometer falling like a stone over night, but so far there was no rain, so again we made an early start for us at 9am As you can see the 48hr moorings are virtually empty. 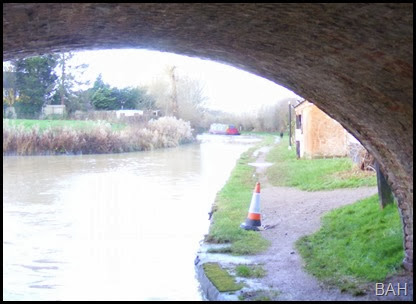 The early start didn’t do us a lot of good and the day was one of one step forward and two back.

As we left earlier than planned I cast off while Diana was still doing things below, After about 20 minutes she went out to the fore deck to tidy the lines and asked where I had put the mooring hook. This mooring hook has a ring on it and I didn’t even realise Diana had used one when we moored up last night as I had used a ring on the bank.
She insisted on walking back and getting it so while she was gone I backed the boat up and met her at bridge 135. It was here that she told me of a sheep entangled in the brambles in the adjacent field, so armed with secateurs I set off to do my good deed, up onto the road and walked back almost to the pub to where the field gate was, climbed the gate and crossed the very waterlogged field back towards the towing path hedge where the sheep was trapped with a good brier round her shoulders and neck. As I got with about 10 years of her she shot back and forth until the brier snapped at the base and she joined the rest of the flock. I turned round, crossed the field back to the gate and the followed the road back to the canal. In the mean time Diana had moved the boat from the bridge hole and was hard aground about 6 foot from the bank and a 100 yard up the cut. She finally got free and I rejoined the boat about another 200 yards north where there is a decent edge.
Had we have had our normal leisurely start we would have been just as far ahead without all the hassle.

It was obvious that Harnser was not going as well as she should so we pulled over near the Wormleighton Mast to look feel down the weed hatch, feeling down to the shaft there was plastic and elastic/cloth, but as I turned the prop I felt something else, it felt like a long flat springy piece of steal curling up round the blade. When I eventually worked it off it was a hard plastic ring with soft orange plastic moulded on to it. 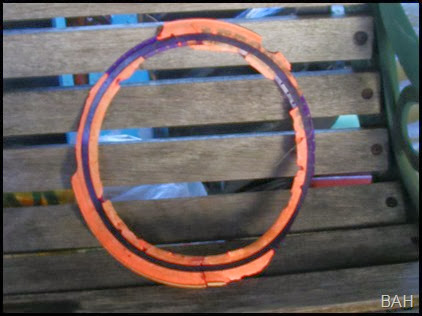 It had gone over two of the blades and was attached to the shaft by the other rubbish. Needless to say once I worked out it was a ring and fed it over one of the blades it was fully on the shaft in front of the prop. I still cant work out what it is.

We continued in the sunshine but with the wind gusting 30 mph at times. Marston Doles still has a notice asking you to leave a bottom paddle up to feed the pound below, but there was plenty of water going over the bywash today without the back pump running. Looking back below Marston Doles I could see the rain behind us, but we stayed dry.

All the Napton flight were also against us with lots of water flowing through all the bywashes. Just as we cleared the bottom lock there were a couple of spots of rain, but no more. As we had not had any lunch and it was now 2-30pm we decided to call it a day on the 48hr moorings by The Folly pub.

The ring looks like the remains of an 'Aerobee' (spelling approximate) - a sort of sophisticated frisbee that flies much further. My son had one and it may still be in the undergrowth at Staple Plain on the Quantocks where we lost it about 20 years ago.