Happy New Year to you all.

Yesterday afternoon my Son in Law picked us up from Banbury so that we could spend New Year with them, bringing us back to the boat this afternoon, consequently we left the boat overnight at the back of Castle Quay shopping centre.

Banbury now has plans to pull down this complex and redevelop it including covering in the canal with a glass roof. Banbury’s developers don’t seem to value its canal at all, when they built Castle Quay rather than looking out on the canal they put all the rubbish disposal facilities that side. I wonder if the new 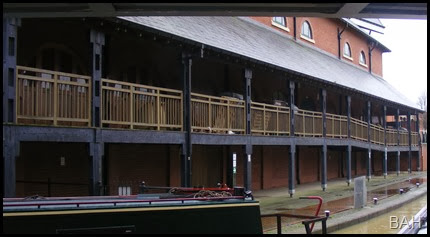 developers will look upon the canal in a different light. I feel it will cause major inconvenience to boaters as I can’t see them allowing mooring under a covered area and this is a very popular area in the summer months.

We arrived back at the boat a little after 2-30 pm and as it was not raining decided to set off. Its the first time we have left the boat unattended overnight so we switched off the heating but left the inverter and fridge on. In the 22 hours we were away it used 19Ah @ 24 volts. The down side was the temperature inside the boat was 1°C lower than outside.( I think that may have been instrument error) but it was still below 10°C.

When we left there were no other boats moored in Banbury on the 48 hr moorings and only a few on the 14 day ones. 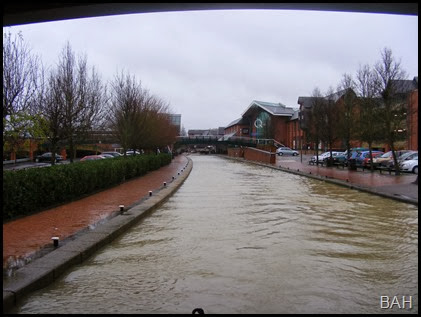 There was a fare flow of water coming out from the stream by bridge 161 so I expect there will be a build up of silt in the canal by spring.
Needles to say we were just approaching Hardwick Lock and the sky’s opened. There was so much water above the lock that it was level with the surrounding concrete, the walkway was well under water. The rain had stopped before we left the lock. 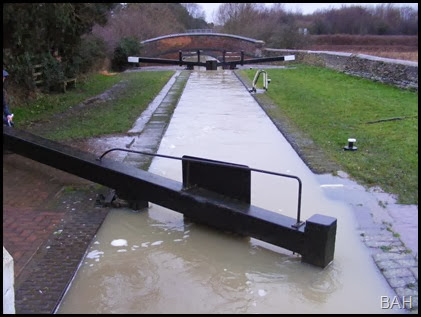 We stopped briefly under the motorway bridge to see how well the new Banbury flood alleviation scheme is working. This consists of a control sluice across the river Cherwell to limit the flow to Banbury and a very large area above it impounded by an earth dam to contain excess water flows. The river wasn’t even over its banks and there was very little surface water within the bunded area. I was expecting to see a lake.

At Bourton Lock we had a chat with the owner of the lock cottage and he gave us a hand to work the lock, again the water was level with the lock surround and I had to pull out gently so as not to cause water to wash into his cottage. He said he works on the cottage at every opportunity but there is still an awful lot to do, including stopping the water coming up under the floors, something that has only happened since the flood alleviation works had been carried out.

Just prior to Slat Mill Lock there is a short length of piling where we decided to stop for the night, we had just pushed the pins in, not hammered and it started to rain once again.

Sounded Dire Brian so I did some research - Not knocking it down - just extending it into the car park.