There was a good frost last night and this morning the roof was white including the solar panels so they weren’t doing much good. 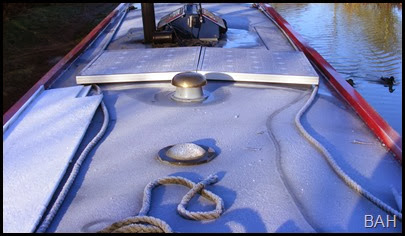 As we were untying so was the shared ownership boat behind, he was heading back to Hillmorton but planned to stop on the GU somewhere so suggested we went ahead. We didn’t see any more boats on the move until we went through the old removed railway bridge by Fox’s Gate. Here we met Zulu long lining the butty Alsager. 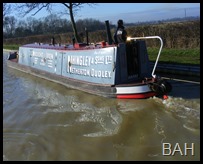 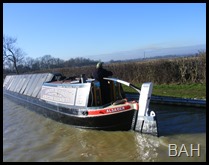 It was a bright sunny day again and although the temperature was reaching 8°C the ground was still frosty in the shade and the winding hole by The Bridge in was covered in very thin ice.

Along the filed edge at Flecknoe just to the north of bridge 101 there are four pairs of white posts just inside the field, The hedge is adjoining the towing path. They almost look as if they should have a notice board fixed between them.

Anyone any idea what hey are for?

Nb.New Dawn who had been following us pulled over at Fox’s Gate and moored up while we continued into Braunston, mooring 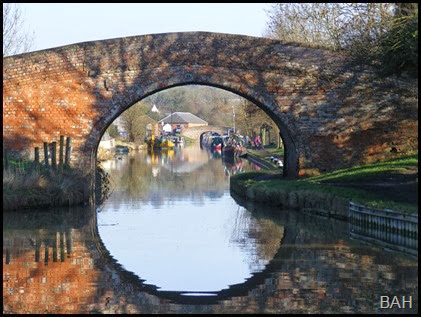 by Butchers Bridge to post some CIBC membership cards and do a bit of shopping. Didn’t get what we want but the shop in Braunston now sells drink at a good price so got 3 bottles of wine for £10.

We arrived at the bottom lock at the same time as a boat coming down and the lock was about half way so we let them down first. This gave me the opportunity to take a couple of photos of the Coventry Canal’s boat Panther that is having some welding done at Ivy Bridge. I found the line of the hull most strange. 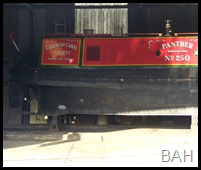 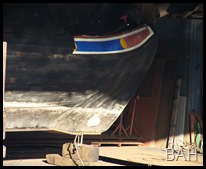 Once we were in the flight the next four locks were with us, but after that we had to turn them all. There was still a lot of frost about even though it had been warm and sunny all day, There was even ice on the lock beam. 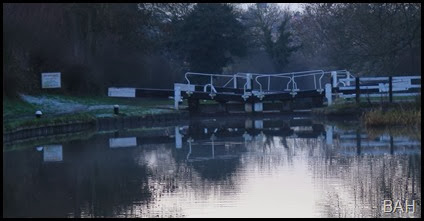 Above the lock there was just one boat moored, it was Nick Wolfe sheeting up with the fire smoking away, as you can see the wind speed is about zero. 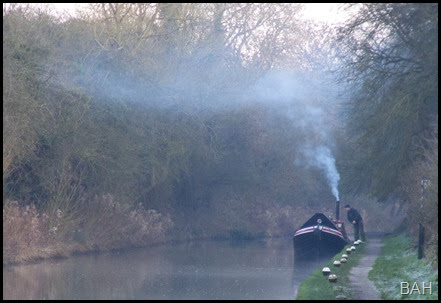 We didn’t meet anyone in the tunnel but I could see a boat in the distance ahead, it must have met the boat coming down hill half way up the flight, I expected them to be further on than this because they passed us before we went shopping. CaRT have trimmed a lot of trees above the tunnel on both the towing path and the off side, most on the off side. 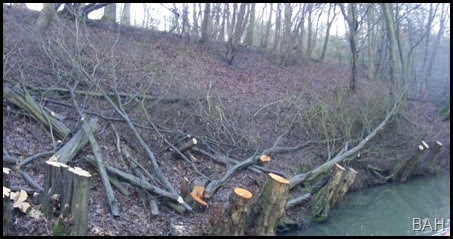 We continued in the weak afternoon sun to just before Norton Junction where we have moored for the night, for some reason there are mooring rings along this stretch of towing path so that makes life very easy. By now it was four thirty and there was still a bit of sun left in the sky. Another great day, but it looks as if it will be a cold night again.

Dear Brian,
The difference in the hull line is the line taken from the wooden bottom having been removed and replaced with steel.
Yours, J R Alsop "Comet"