As we were moored right outside The Boathouse pub it seemed a waste not to eat there yesterday evening, I think we were two of eight dinners that night. The rain was blowing in around their doors that face the canal which was not surprising the way it was raining and blowing. We  were very pleased we didn’t have far to go to get to the boat, that’s for sure.
The weather overnight was horrible with the wind and the rain, then suddenly it would all go still and quiet only to come back worse a few minutes latter. I was very glad we moored where we did and not on the opposite bank under the trees.

We were very pleased to wake to sunshine and pushed off about twenty to ten down to the Stop House to fill with water. The Stop House is an old toll office and is now a Canal and Rivers Trust office. If there is one thing that annoys me its out of date notices like this one on their door, how much effort does it take to remove it or do they just not care what they display. 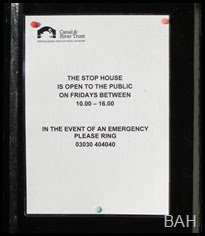 Another notice gives the hours they are open to the public and an emergence number of 03030 404040 to ring if they are closed. I wonder if that line is manned 24 hours a day 7 days a week.

As we filled with water I watched a bird trying to eat from a seed dispenser that was obviously not designed with him in mind, but he still got a free breakfast. 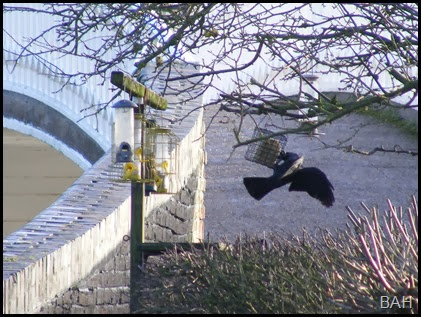 Once topped up with water we went to the marina entrance to wind before heading back to Napton. I made a much better job of turning here than I did taking the left junction at Braunston Turn where the wind pinned me straight against the central island, my fault for going round on tickover and not allowing for the wind coming across the open fields.

We carried on along the GU to Wigrams Turn where again we took the left hand turning on the South Oxford. It was here that the towing path was under water when we came this way last week. 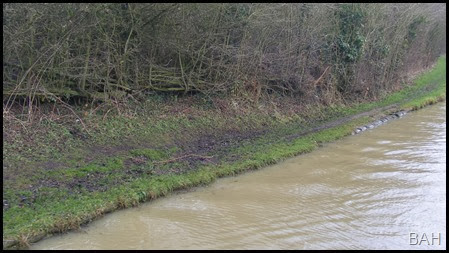 We had just passed the winding hole by The Folly moorings when this chap came trotting down the towing path towards me, I only had time for the one shot before he ducked into a hole in the hedge right opposite me. 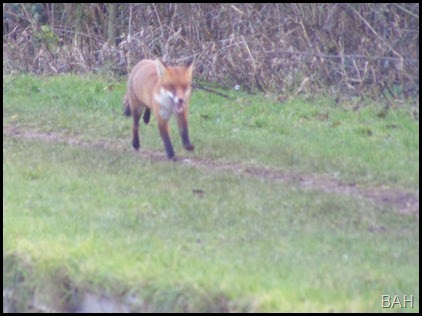 At the water point a chap had just finished ether installing or overhauling one of the cast iron water points, is Napton considered a heritage area to have avoided one of the stainless monstrosities  or is it due to the general outcry about them.

There was a boat just exiting the bottom lock as we nosed under the bridge, he pulled over and stopped at the services which made it a bit tight for us to get round him into the lock, but we just maid it, the lady did offer to pull forward a bit and had we been any longer we would have needed it, but it was all OK. This also meant that the flight was with us which was very handy.

The day has been mainly fine with a few very short showers which gave a nice rainbow, I just wish the lens was wide enough to get the whole thing in. 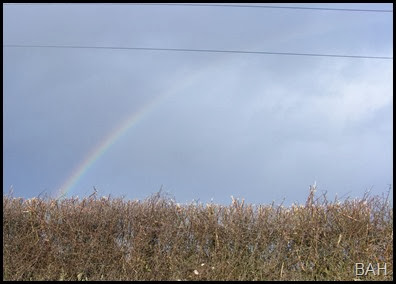 We finally moored just above Napton Top Lock at 2 pm. tomorrow we just move up the arm and go home until the next thrilling adventure of “The Travels of Harnser”