Last night dinner was taken at the Welcome Chinese Restaurant  Sunday to Thursday nights they do an all you can eat buffet for £19-50 a head. It is the first Chinese restaurant that I have been to where they give you a bowl to eat your meal out of, so much better if you are using chopsticks.

This morning we were away at 10 30 after a walk round the market and a visit to the bank. We just pulled out of the moorings as another Narrowboat arrive to take our place.

Just below Hemingford Lock there is a shoal running out from the landing stage to almost mid stream. Last time we came this way we grounded on it as it was unmarked, now they have put a row of green buoys ending with a red. You could well think you should navigate between the red and green, there is room, but you would be wrong and hard aground. 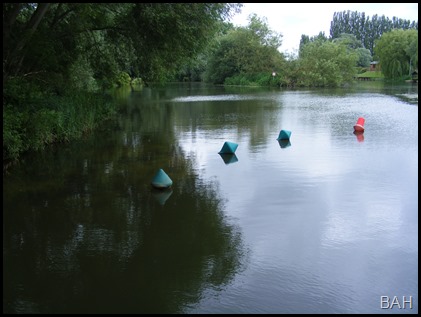 Every time we have come this way in the past there has been a sign warning about rowing ahead and we have never seen a  boat until today. 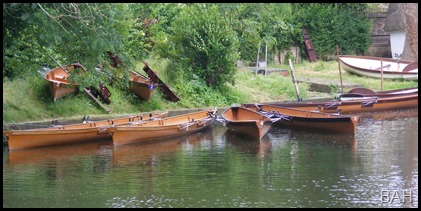 In the next reach a pair of Cormorants were drying off following a dip. Birds are so much easier to photograph when they sit still. 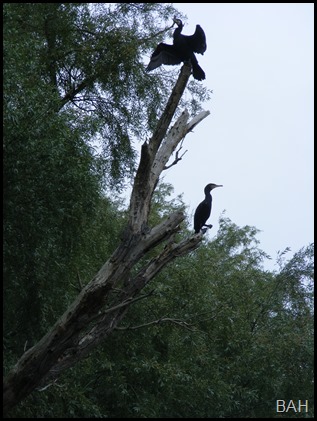 For some reason they warn you about hire craft  at Houghton Lock they warn you of “Hire Craft” It is the only sign I have ever seen like it. 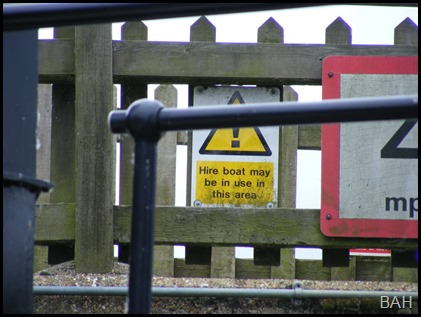 Just before Huntington we caught up with a shed on a barge being pushed up the river, I suspect they were going to be working on the bridge as there were already divers working there.

The flood defence work in all the front gardens along the river front at Godmanchester is really looking good now with all the grass growing and things looking quite established.
As we approached the loop at Brampton Lock I could see the lock gates were open and a cruiser sitting in the entrance waiting to come out and when I got round to the mouth of the lock they were still there so no easy drive into the lock.

I spotted a Buzzard flying over the river with something dangling from his talons, unfortunately it doesn’t show up to well in this photo, he wouldn’t keep still! 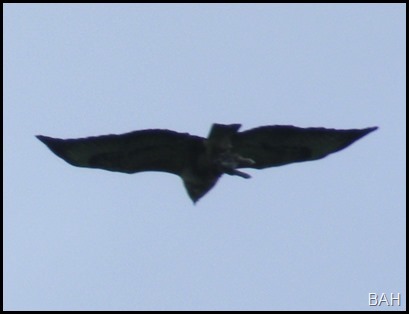 Unlike the dozens of geese we saw with their offspring forming large rafts on the river. 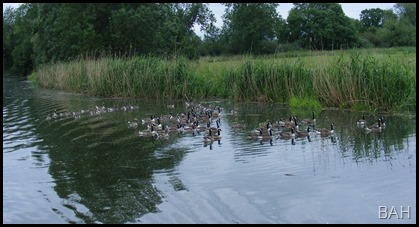 We had planned to stop for the night at St Neots and then head back downstream in the morning, however the “Slow Cooker” still had a hour with tonight's dinner in it so we decided as the weather was getting better to push on. There is only one mooring after St Neots and that is just above Eaton Socon Lock so it would have to be Great Barford, only 6 miles, O and two locks.

The span of the bridge over the weir at Roxton Lock is very flat, in fact it looks as if it dips in the middle, it is also very slender. There is a notice at the end saying “Maximum of 5 persons on the bridge at one time”

When we arrived at Great Barford it was just on ten past seven, the wind had died down and the water was flat. There was not another boat to be seen so we could pick our mooring for the nigh.

As we were low on water it was the bit closest to the tap. While the tank was filling I nipped into the pub and returned with 2 pints of bitter which we enjoyed with our meal.

Our after diner entertainment was courteously of a group of young people camping nearby who were having several canoe races from the bridge to the lock. There were lots of shouts of “in out” but not many paddles were in time with the calls.